When Matt Ryan debuted his new character on last week’s Legends of Tomorrow, the actor was almost unrecognizable underneath Dr. Gwyn Davies’ neurotic, scruffy exterior. The circa 1925 scientist not only looks different than John Constantine, but he also carries himself in a way that’s completely unlike the cocky master of the dark arts.

That physical transformation is a manifestation of the guilt and emotional turmoil that torments Gwyn, and this Wednesday’s episode (The CW, 8/7c) will start to unravel that which plagues the Legends newcomer, Ryan previews in the below Q&A.

The actor also extols the fun of playing someone like Gwyn and details the qualities that he does have in common with Constantine. 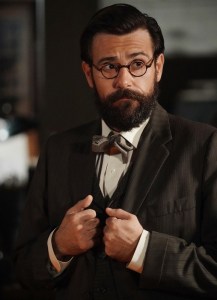 TVLINE | I was watching the last episode and thinking to myself that you looked like you were having such a blast in those scenes with Sara.
Yeah, I really was! And just with this character in general, as well. He’s such a different expression to John. It’s great to get under his skin and let loose a little bit. And the parallel, in a way, of John met Sara in a mental institute. There’s that whole episode when they’re in the mental institution. They’re kind of parallels in a way — not like there should be anything to be looked into in those things. But it’s just interesting how kind of those things parallel each other. And also, in Season 3, Episode 10, when we met John, there’s this moment between him and Sara, and Sara is his point of entry into the Legends, and it’s the same with Gwyn. There’s that lovely moment between them when they connect. It was a lot of fun.

TVLINE | In the scene where you are pretending to kidnap her, just the physical comedy aspect of it was fantastic.
[Laughs] I know. I found John completely hilarious in his sarcasm and his wit, but there’s more of a physical element with this, and I can discover things in the moment in a way that I couldn’t with John. It was just so funny. I would laugh in my head, going, “What am I doing? Is this too much?” because it’s such a departure from John. But as an actor, it was so enjoyable and fun to play.

TVLINE | Going into this first episode of yours as Gwyn Davies, I was wondering how they were going to address the resemblance between Constantine and your new character. What were your thoughts on that?
Obviously, I’m the same actor returning in a show as a different character, and there is a world where the audience or the Legends could get hung up on that, and I like the way that we address it in a funny way, and the fact that none of them say he looks like John is actually really funny. [Laughs] At the same, it doesn’t stop the action. It keeps the story of Gwyn going forward. So I really like the way they did that, to be honest with you. It was subtle and it didn’t slow anything down in terms of getting to know Gwyn or how he works with the Legends. So I thought that was handled really well, and it was funny, and it’s a little nod as well to the audience, to John.

In one of the episodes coming up, there’s an improvised line, where they’re in John’s manor and somebody’s talking about John, and obviously, John was a huge part of the Legends, but the manor is a huge part of this season, so his name comes up a lot. And then there’s this moment when they’re talking about John, and Gwyn is like, “Who’s this John?” Just those little moments are really nice little nods to me playing a completely different character. 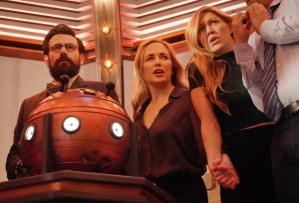 TVLINE | And I think the show can get away with it because this character is so different from Constantine. How did you go about developing his look and his physicality? Was that something that you had discussions with the producers and the department heads about?
Yeah. Initially, when we talked about me returning as a new character, it was what serves the show in terms of what energy could we bring to the show and what kind of mechanism if he was with the rest of the Legends. And also, he has to be so far away from John in a way… The physicality is completely different, the way that he’s neurotic and he has all of these internal struggles, which are manifest in his physicality. John was someone who always stood in a wide stance. He was cocky, his shoulders were always kind of loose. He was much looser and a completely different rhythm to what Gwyn is. Gwyn is a lot more faster-paced in his mind. His mind works like a thousand miles an hour, almost like a Sherlock kind of neuroticism in a way, and that’s his genius.

What I love about him is he’s someone who is in development as a human being. When we meet him, that’s not him wrapped up in a ribbon and a bow, and that’s the character. He’s someone who’s on this journey to discovering a lot about himself, and that [has] to do with the physicality of it as well. We talked a little bit about him being more diminutive, and [his] shoulders are more tense, and he holds all of the tension in his body. Then when does he stand up again? If I was trying to do something a little more subtle, then I don’t think it would have worked. It has to be so extreme to force the audience to look at you differently, and then we can go from there.

And also, the thing is that you’re not only forcing the audience to look at you differently, it’s forcing the other actors as well. The first day I was on set, everyone’s like, “Ooh, what’s going on?” and I could see the way they’re looking at me, they’re looking at me as Matt or John. And where we are in the season now, it’s like, “Who is John?” and I don’t mean that in a bad way, but like he’s already integrated into the group in a way where people have accepted him, and that’s been a real joy.

TVLINE | We got a hint that something tragic happened in Gwyn’s past, that he lost somebody he loves and that’s why he invented time travel. What can you say about what happened there, and how that’s affecting him in this next episode?
There’s a scarring to him that is very raw and pure. Gwyn is someone who’s actually very open and vulnerable in a way that John would never be. There’s something wonderful about that and how he wears his heart on his sleeve, but at the same time is neurotic and trying to guard it. It’s an interesting, complex psychology that he has.

Him having the motive of guilt — which also is a theme that runs with John but it comes from a different place — he feels like he let someone down or let people down, and that he desperately needs to try and fix something. There’s a burden of guilt on him, and he needs to do something about it, and it’s driven by a connection to someone that, in terms of where Gwyn comes from in 1925, that world was so different to the world we’re in now. The way that he would have relationships with people is so different, and him being thrust into the world of the Legends is a whole world of discovery for him, because he’s coming from this very tightly bound society in World War I and then 1925.

So there’s this drive for him to resolve and do good by the thing that he did wrong and fix something, and that comes out of a love and a heart that he has for that person or persons. So the guilt that drives him is a lot more tender than the guilt that John was driven by. We’ll find out in the coming episodes what that is and how he can then discover and readjust his internal mechanisms to a world of Legends and time travel and all these different periods of time, where, hopefully, he goes on a huge discovery about himself, and that’s a really cool thing.