Warning: The following contains spoilers for Wednesday’s Legends of Tomorrow. Proceed at your own risk!

On Wednesday’s Legends of Tomorrow, newcomer Dr. Gwyn Davies opened up to Zari about the tragedy in his past that he’s still trying to right — hence his quest to invent time travel — and in turn, the scientist revealed something deeply personal about himself.

A few years into World War I, Gwyn and a fellow soldier were tasked with delivering a letter to a unit, but along the way, the other man was killed. And by the time Gwyn arrived at their destination, the unit was no more. Gwyn thought God had sparred him so he could go back in time and save them all. But since he keeps failing, Gwyn now believes that God is punishing him for being a coward and for his sins.

Among those men who perished was Gwyn’s best friend, who “managed to light up a room with a smile” and wrote him “the most delightful poetry,” Gwyn describes.

“You loved him, didn’t you?” Zari quietly remarked, understanding dawning on her.

“God forgive me, I loved Alun more than anything,” an emotional Gwyn confirmed.

In “telling a story about someone who’s having difficulty with the way that he feels about someone else because of the social constructs that are imposed on him from the time that he comes from,” and then exposing that character to time travel, “there’s a world of discovery in there,” Matt Ryan, who plays Gwyn, tells TVLine. “Portraying a person who goes through this huge development and discovery and opening in himself, it’s a story that needs to be told.” 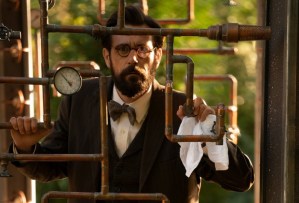 Given the repressed and fraught 1925 timeline that Gwyn hails from, it won’t be an easy journey to self-acceptance. “He’s not a man that’s going to turn around straightaway and say, ‘I love the man,'” Ryan notes, adding that that love “would be very different [compared] to him being in a relationship with a man in today’s age… It was illegal to love a man in that way. There were so many social implications.”

“The interesting dichotomy of him being religious and his love for a man, there’s a huge conflict there that a lot of people go through today,” Ryan continues, “and telling that story in the framework of 1925 and a man who’s tightened by the ropes of society is a really interesting way to explore that. I just felt like that’s a really important story to tell, and if we can mine that and get under that, then that’s a really good thing.

Gwyn now also shares something with Ryan’s previous Legends team member John Constantine, who is bisexual. Both characters are part of the show’s exploration of LGBTQ relationships. “It’s great to continue that theme in a way” with Gwyn, Ryan says. “The funny thing was John would sleep with anyone or anything. I think in one of the animations that I did, there’s a line when he turns around and says, ‘Oh, my ex is there,’ and it’s King Shark. I love that about him, because he transcends any kind of sexuality that is around today. And [Gwyn’s story] is a little bit more specific and honed and rooted in some of the problems that people go through today.” 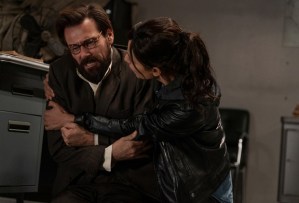 Making Gwyn’s confession even more special was the fact that he confided in Zari 1.0. It’s not lost on Ryan that he and co-star Tala Ashe, who previously shared scenes as lovers Constantine and Zari 2.0, are still playing big emotional moments together — but as completely different characters this time around!

“I’ve got to say it’s so unique to do that on a TV show or anywhere,” Ryan shares, likening the experience to “when you’re doing repertory theatre and the same cast does four different plays. That’s the only comparable medium that I can kind of put it in.”

For Ryan, Zari was “a perfect person” for Gwyn to share his truth with, because “Tala has such an amazing quality about her on the show and in real life,” the actor raves. “She has that touch where she can open people in a most wonderful way. And it was really fun playing those scenes as different characters.”