The Ghosts are coming out of the woodwork — or more precisely, the shed. In this Thursday’s episode of the hit CBS comedy (airing at 9/8c), Sam discovers the spirits of three British soldiers in one of the large estate’s structures. Among them is their leader Nigel, with whom Isaac shares a complicated history. So when Nigel comes knocking at the main house, Isaac is forced to confront a big secret that he’s been holding onto for a very long time.

“Isaac is dealing with the concept of coming out, but he’s not necessarily coming out the way we all expect the character to come out,” his portrayer Brandon Scott Jones previews. “It’s a little bit of a twist for what we might [be] expecting throughout the episode, but I’m really, really excited to see not only the reactions to it, but to see where he goes from here.” 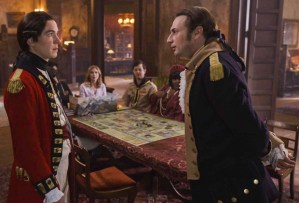 Isaac and Nigel’s dynamic is “loaded,” seeing as how they fought on opposite sides of the Revolutionary War, making them “sworn enemies.” Of course, their status as historical rivals is muddled by their feelings for one another. “There’s a little bit of a Romeo and Juliet vibe going on,” Jones shares. “There’s a bit of an unrequited love with it, but neither of them are capable of expressing it.”

“There’s something really fascinating and hilarious about being trapped in an afterlife for over two centuries with somebody that not only you haven’t fully expressed your feelings to, but also are hiding a very deep, dark secret from,” Jones adds.

As the series explores Isaac’s unspoken truths, Jones compares his character’s journey in this week’s episode to “like a coming out story on steroids.” “What I mean by that is, as a queer person myself, coming out of the closet was a very hard thing to do when I got a chance to do it, but I wasn’t 240 years old,” Jones notes with a laugh. “So to be that repressed for that long, like what has built up?” 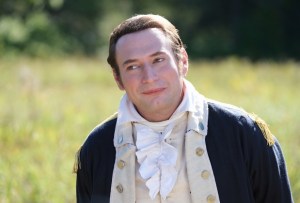 Luckily for Isaac, he has a new human buddy in Sam to help him get a fresh point of view on his situation. “Nobody’s been able to see him from the living world for 200 and plus years. So now that he has this opportunity, and here’s somebody who has a perspective that he could never have — or at least couldn’t have, especially in the modern world — I think he finds a little bit of hope that she might be the one to accept him in all of that, or she at least might be the one to encourage him to move forward and confess what he needs to confess,” Jones shares.

But Jones cautions that while Isaac is making progress towards self-acceptance, “he has so much further to go,” the actor says. “He’s definitely somebody who is taking baby steps.”

And even though finding humor in that journey is a requisite, Ghosts being a comedy and all, “it’s important to the performers and the creators that Isaac never comes across as a joke, especially [with] the very serious and the very real things that he’s dealing with, which is about learning who you are and accepting who you are,” Jones emphasizes. “That this is a person on a journey of self-discovery, and that journey of self-discovery spans multiple lifetimes, is really something that you don’t want to undermine.”