Will The Flash explain MIA superfriends? Will Magnum P.I. learn his lover’s secret? Do Ghosts believe in love after life? Read on for answers to those questions plus teases from other shows. (Email any brand-new Qs to InsideLine@tvline.com.)

With The Flash event, “Armageddon,” fast approaching (the five-parter premieres tonight), I was wondering if a reason will be given in the show for why Supergirl and Superman aren’t helping Barry in his time of need, stopping the threat to Earth that Despero poses? –James
Ah, ye olde Why Can’t a Super Simply Intervene? conundrum. I delivered your Q to Grant Gustin, who responded, “That’s a very good question; unfortunately, I think the realistic, boring answer is because of scheduling, life, Supergirl wrapping up….” Meaning, there will be no in-story accounting for the Kryptonian cousins’ absence. “I wish there was,” Gustin said, “but no, there’s no acknowledgement of our [hero] aliens.”

Any scoop on Succession to do with Shiv? –Jasmine
As revealed in promos, this Sunday there will be quite the clandestine gathering to do no less than choose whom the GOP will field to hopefully succeed “The Raisin” as POTUS. Shiv will find herself drawn to back one particular horse, but can she successfully argue against the deplorable who manages to earn Roman’s support?

Any scoop on La Brea? –D. Allen
Tonight’s episode is certainly one of the most interesting of the season, shedding much needed light on the origins of some fort residents. In fact, the closing moments will have you thinking, “Wait, they’re not going to suggest [spoiler]? C’mon, they’re not actually suggesting [spoiler]..? Oh wow, they are!!!” 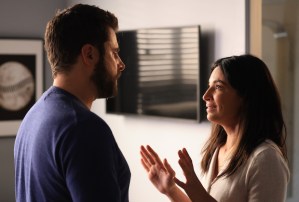 Have we seen the last of Darcy on A Million Little Things? –Julie
“You’ll probably find this hard to believe,” James Roday Rodriguez told me (with a hint of sarcasm), “but there are many layers of melancholia coming. Just when you think something good is going to happen to anybody on the show, if you’re a betting man you can probably go put some money down that it won’t.” When I suggested that Gary has to at least consider that Darcy’s baby-to-be is his, JRR acknowledged that his character — who is an actuary, remember! — “is a numbers guy, so you would think he would have been able to figure out [that possibility]. No, we’ve got a couple surprises coming. That storyline is not done.”

Since we know that Magnum P.I.‘s Lia has a secret that hasn’t yet moved forward, when will we gain some insight as to what this secret is about? – Tony
You will learn everything in the Christmas episode airing Friday, Dec. 10.

Are either of the NCIS shows going to air Christmas episodes this year? –Maria
I see what you did there with your subtle NCIS: Hawai’i erasure. But all I have for you is coal — neither NCIS nor NCIS: LA will serve up holiday outings this season. Update: Hawai’i isn’t doing a holiday episode either.

I live in the UK, where NCIS was shown on Fox on Sky, but Disney + who owned Fox closed the channel down at the end of June. Which channel in the UK will show Season 19? –Karen
I usually don’t get involved in UK affairs (the metric system, ugh!), but there was a lot of mail on this issue. And as you may have recently learned, NCIS Season 19 will be on Disney+ in the UK, though a premiere date is TBA. 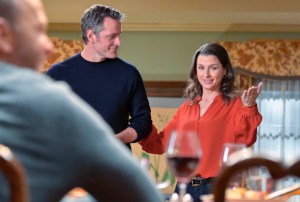 Will Peter Hermann be back on Blue Bloods this season? I really love Jack and Erin’s chemistry and it would be great to see Peter on the show again. –Bianca
Nothing is firmly on the books yet, but the hope is to have Hermann back as Jack later this season.

I noticed that while the late Detectives Morales and Cappelletti were mentioned or referenced in recent Law & Order: Organized Crime episodes, Detective Washburn hasn’t been seen or given any kind of mention. Is he still with the OCCB team, or did he leave after what happened with Angela last season? –Shon
Washburn, aka the detective whose stupidity was directly responsible for the attack on Angela Wheatley at the end of Season 1, is so done at Sgt. Bell’s unit that showrunner Ilene Chaiken says the character won’t even get the dignity of a reference in Season 2. “I know what happened to him,” she teases, “but I don’t think we even mention it.”

Is Ghosts really doing a “Will They/Won’t They” thing with Flower and the viking? –Dee
The brief attraction that we saw earlier this season between Thorfinn and Flower is “something we’re going to be playing with more — and that’s not the only dalliance that we’re contemplating and working towards,” exec producer Joe Port tells TVLine. “The Thorfinn and Flower thing is a funny opposites-attract relationship, and it’s something we want to explore.” Bonus Spoiler! One of the downstairs ghosts will be featured in a two-episode arc in the middle of the season.

I saw that NBC will be airing the second season of Transplant. Any word on Nurses‘ second season, which aired in Canada this summer? –Richard
I am hearing that while NBC will eventually air Transplant Season 2 (which hasn’t even premiered up north yet), it has no plans to do same with Nurses. 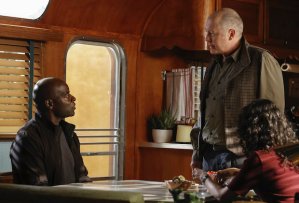 Will we ever get a flashback episode on The Blacklist to see why Dembe is not with Reddington anymore? –Peter
In a word, yes! As EP John Eisendrath told Inside Line, “There will be an episode this season in which we look back on Dembe’s journey during the two years between the end of Season 8 and the beginning of Season 9. It will not only reveal what drove a wedge between Dembe and Red, but also tell the story of how Dembe became an FBI agent.”

Any scoop on NBC’s Ordinary Joe? –Chris
Amy’s confession to Music Joe that she slept with Bobby will be “a big bump in the road” for their marriage, portrayer Natalie Martinez tells TVLine. “Is it going to make it or break it? Amy knows what she’s done, she’s ready to fight for her marriage. Now the question is, is Joe?” As for Amy’s political career, even though Bobby’s widow is taking over his congressional seat, Amy is still going to run for the position. “It’s going to get ugly,” Martinez warns. “Secrets are going to come out.”

Can you tell us anything more on Dave Annable’s Walker character? –Kelly
With the reveal that Dan has invested in the surveillance system spying on the Walker family, “I think he took a big leap into creep land,” Annable says, adding that “Dan’s got a plan, so we’ll see how much Gail, the head of the Davidsons, is involved in that. But I think Dan’s kind of like a little henchman, too. Maybe he’s getting his orders from the top.”

Do you want the Inside Line on a favorite show? Email InsideLine@tvline.com! Questions left in Comments will not be read and may very well count against your final score. (With additional reporting by Vlada Gelman, Kim Roots and Rebecca Iannucci)