While we all know troubles don’t last always, the Bordelon family’s difficult times on Queen Sugar seem to dwell longer than most.

Thankfully, that trend shifted when the Season 6 finale of the endearing OWN drama aired this Tuesday and finally gave the Bordelons a much-needed win. Sam Landry had tried to blackmail the family into selling their farm to him by using Ralph Angel’s crime as leverage.

But Aunt Vi and Hollywood devised a plan to track down Theo, the dude who set up RA, so he could tell the truth and exonerate his old prison buddy. Meanwhile, Dominic worked his magic for Nova and had the Bordelon farm declared a historical site upon discovering that those unearthed remains belonged to slaughtered Black farmers who had been killed in a race massacre.

Vi and Charley wanted to see the look on Sam’s mean old face when they broke the news that they weren’t selling, but had to settle for cracking the smug smile off his daughter Parker’s visage instead. Tina Lifford, who stars as the venerable Aunt Vi on Queen Sugar, says the fictional TV family and their fans truly needed that victory in the finale. 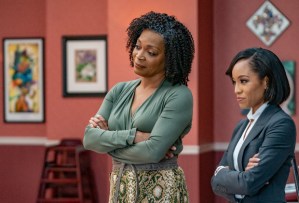 “Trials and tribulations are the Bordelon way,” Lifford tells TVLine with a wry chuckle. “Season 6 was rough. We almost lost Prosper, the police kept harassing and abusing Nova, Aunt Vi had a health scare. There was even a woman trying to steal Hollywood away from Vi. But through it all, the Bordelons kept loving on each other and fighting the good fight, and it all paid off in the end. I know fans felt a sense of relief because we as the cast felt it, too.”

Best of all, Lifford adds, Aunt Vi and Blue were reunited. Ethan Hutchison, who plays the precocious preteen, temporarily left the show to shoot his new role on Season 2 of Disney Channel’s Secrets of Sulphur Springs, but he returned in time for the Season 6 closer.

“Because I absolutely love Ethan both as a human being and an actor, it was lovely to work with him again,” Lifford lovingly recalls. “You know how they say you can use real life for the scene? In that moment, there had been a real distance, and we hadn’t seen Ethan in a few months. So to be able to reconnect with him in a scene was perfect because it didn’t feel like acting.” 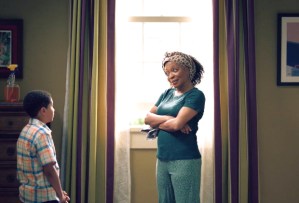 Elsewhere on Queen Sugar, Nova and Dominic officially became a couple, Charley said she would marry Davis and move to Los Angeles, and Ralph Angel and Darla welcomed their beautiful baby girl into the world.

When the show returns next year for its final season, Lifford says she hopes the upturn of events continues for this beloved brood.

“Black joy looks good on this family,” she adds. “It can’t and won’t be all good times all the time, but this is a start.”

What did you think of the Season 6 finale of Queen Sugar? Grade the finale in our poll, and drop your thoughts in the comments.