Teddy couldn’t catch a break on last week’s Our Kind of People.

He tried to apologize to his daughter Angela, and his other daughter Leah became cross with him. He helped Nikki’s father get an early release from prison, but an angry Angela accused him of overstepping his bounds.

The final straw was telling his employee and mentee Tyrique, who had confronted him, what actually happened to Tyrique’s deceased father. This caused an already stressed-out Teddy to have a heart attack.

“I have a son and two daughters, and it’s never easy navigating the waters of fatherhood,” Morton tells TVLine. “But it’s made more difficult for my character because of his money and power. Angela believes I did something terrible to her mother. And Teddy has too many secrets and motivations, and all of this complicates my relationships with all of these people.” 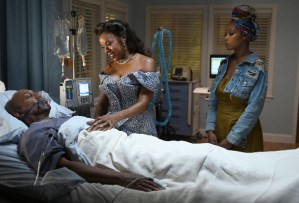 While Teddy spends the majority of tonight’s installment (Fox, 9/8c) in a coma in the hospital, he does have fevered dreams that reveal more about him and why he does such dastardly things.

Morton, whose previous directing credits include Scandal, Bull and God Friended Me, says he didn’t think he would be able to direct a Season 1 episode of Our Kind of People, but it worked out in his favor eventually.

“When I pitched the idea to direct,” Morton shares, “the executive producers’ first concern was whether or not it was a good idea because they didn’t know what the first season was going to be like. When they realized I had directed before, then they determined which episode I was going to direct.”

As for Teddy’s heart attack, Morton says it was oddly enjoyable to portray.

“These scenes are always kind of fun,” Morton explains. “I hope I never have a heart attack. But I did a lot of research as to what happens because I knew I was going to be directing the following episode. The fall down and all that stuff, it is kind of fun. It’s like doing a fight scene. But you’re fighting yourself.” 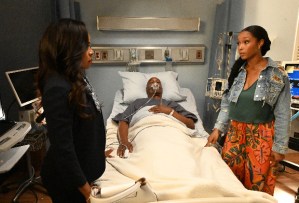 Without giving too much away, Morton teased more trouble for Teddy and his daughters following his cardiac arrest.

“The trauma of Teddy’s heart attack will affect the family in all kinds of ways,” Morton foreshadows. “Viewers will see what that is when they tune in tonight. And then moving forward, it’s a matter of how much will be revealed or not about the secret that Teddy’s been holding.”

Are you excited about what happens next on Our Kind of People? Drop your thoughts in the comments.