Cough, cough. The dust has barely settled after The Voice’s Live Playoffs. Some of us are still bitter about the eliminations. (Spoiler alert: I’m gonna be sulky for the rest of the season about Samuel Harness going home.) And yet, here we already are, a sour note away from the Top 13 shrinking to the Top 11. Which performers Monday sang like they could just skip ahead to the Semi-Finals and which sang like they were on the fast track to compete for Tuesday’s Wildcard Instant Save? You know the drill; read on, and we’ll discuss, dither, debate — the works.

Paris Winningham (Team Blake), “What’s Going On” — Grade: B+ | Oo, Marvin Gaye’s classic is a toughie to do justice to. But I had — didn’t we all have — faith in Paris, who dedicated his performance to his late grandparents. On stage, he hit a bum note here and there during the verse but largely redeemed himself on the chorus. His delivery was smooth and kinda casual till midway through, at which point he really let loose and made me — all of us? — almost entirely forget that early misstep or two. He’ll advance, no sweat. Heck, apparently he even tossed his hat directly onto someone’s head at some point, but I missed it because I was typing. Hello, REWIND!

Jeremy Rosado (Team Kelly), “Because You Loved Me” — Grade: A- | After dedicating his Celine Dion cover to his father, who is living with a heart condition, Jeremy took to the stage and delivered a rendition of the ballad that was steeped in his trademark vulnerability. He started out fine, but just fine — vibrato city. But once he hit that massively long note in the middle, he caught fire. He went bigger and bigger and managed to make the gamble of tackling so epic a number pay off. Easy pass into the Top 11. I know Paris is probably technically the better singer, but for my money, Jeremy outsang him Monday.

Ryleigh Plank (Team Ariana), “Rhiannon” — Grade: D | Before the spotlight fell on Ryleigh, she shared that her rendition of Fleetwood Mac was dedicated to her sister… Rhiannon. And when it was “go” time, urgh. I kinda wanted her to go. The rhythms of the lines she was singing were familiar, but the notes sounded like she was making them up on the spot — and not making them up well. Yeah, yeah, it was impressive that she could kinda yell-sing the title a few times, but mostly, this alternated between underwhelming and unpleasant. If she’s not singing for the Save tomorrow, I’ll eat my hat. Or Paris’. Or both. 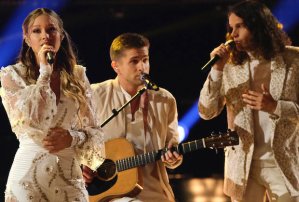 Girl Named Tom (Team Kelly), “Dust in the Wind” — Grade: A+ | The show oughta just send this trio on to the finals already and be done with it; they’re that good. After telling us that their Kansas cover was dedicated to their grandma, who was losing her memories to dementia, they turned out a performance that was freaking flawless. Like, there are dewdrops that aren’t as pure and perfect as the sounds that they made. Excuse me while I stop off at thesaurus.com to come up with some new synonyms for “amazing.”

Shadale (Team Legend), “Life Is a Highway” — Grade: A- | “Life Is a Highway”? Really? Curious choice, despite Shadale dedicating it to her truck-driver dad and her mom. From the little of rehearsal that we heard, Shadale’s coach was spot on in his decision to raise the key. On stage, well, all right! Shadale came out spitting fire. And she wasn’t renting that stage, she owned it. Bummer that the band sometimes drowned her out, especially on her lower notes, but damn. This was a winning performance. Rowdy, raspy and raucous — fun with an exclamation point.

Hailey Mia (Team Kelly), “I’ll Stand by You” — Grade: C | In rehearsal, the 14-year-old revealed that she was dedicating her Pretenders cover to… her coach. And heaven knows her coach wasn’t going to say that she hadn’t done her proud even though at times… well, she can’t have. Hailey’s version of the ballad started with an especially spare arrangement that showed off how pristine her voice can be. But unfortunately, it was downhill from there. She went further off mic than was advisable now and then, and seemed to start making up notes and sticking them in. Not as egregiously as Ryleigh had, but still, not ideal. 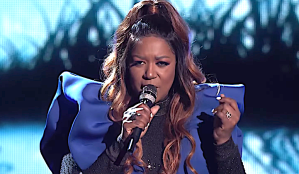 Wendy Moten (Team Blake), “Blue Bayou” — Grade: A | After dedicating her Linda Ronstadt number to the teacher who’d inspired her, Wendy did… well, what Wendy always does. She put forth a fantastic performance, poised and pitch-perfect. But is it just me, or is there a kind of disconnect with Wendy? The notes are all there. The nuances are there. The presence is there. I just don’t tend to get a whole lot of emotion from her. She’ll advance to the Top 11, for sure, and rightfully so. I just wish we got a better sense of her being in the songs that she sings. Does that make any sense?

Jershika Maple (Team Legend), “God Only Knows” — Grade: A+ | Having dedicated her number to the fourth- and fifth-grade teachers who discovered that she has dyslexia, Jershika totally schooled us in what a great performance is. She wasn’t in good voice, she was in great voice, working that lower register to stunning effect. And when she belted, jeez. It had to have blown leaves out of the trees, she was so powerful. What’s more, unlike with Wendy, I 100-percent felt Jershika in every note. I should really thank her for illustrating my point about Wendy being awesome but, by comparison, detached.

Jim and Sasha Allen (Team Ariana), “Your Song” — Grade: B- | Oh, these two needed some redemption after last week. On their Elton John cover, dedicated to a cousin who’d passed away, they sorta got it, in that their performance was perfectly pleasant. But there was nothing remarkable about it. (And coming after Girl Named Tom, they would’ve had to have been truly extraordinary to wow anyone with their harmonies.) This went down like a glass of warm milk: nice and easy. It just wasn’t anything that you’d find yourself looking up on YouTube tomorrow or rushing off to stream. 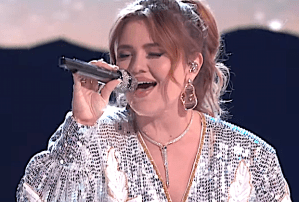 Lana Scott (Team Blake), “Humble and Kind” — Grade: B- | As Lana was telling us that her song was dedicated to her dad, all I could think was, “Forget it, kid. No way you can do it better than Addison Agen.” And Lana didn’t. But she brought to it an appealing twang and enough oomph to power a whole album. Not sure about the wisdom of singing so much of the song at 11, but this was pretty good.

Gymani (Team Kelly), “Made a Way” — Grade: A | Even in rehearsal, Gymani sounded like she was gonna slay the number that she was sending out to her mom. And from the start, as I had with Jershiika, I had a greater sense of Gymani really experiencing the song than I had with frontrunner Wendy. I know not everybody is a fan of wailing, but I found it thrilling when Gymani just went for it. That to me was her truly singing from the soul. Strategically, it was probably a smart move for her to take us to church, too; that’s usually a Fast Pass to the next round. 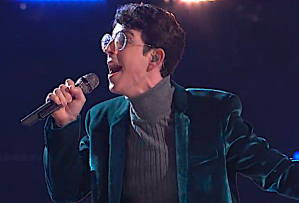 Joshua Vacanti (Team Legend), “You Will Be Found” — Grade: A | Joshua told us before his performance that he was dedicating his Dear Evan Hansen number to his high school drama and music teachers — and, for good measure, all the theatre kids out there. It was a perfect song selection for him, playing to his natural flair for the dramatic and allowing him to really show off that bonkers range that he has. Now that we’ve established that Joshua is a shoo-in to advance Tuesday, can someone please tell me why he was wearing pants, each leg of which was wide enough to fit his entire body in? Twice.

Holly Forbes (Team Ariana), “The Dance” — Grade: C | Before Holly hit the stage, she told us that her Garth Brooks number was dedicated to the stepmother who had always been there for her. Ari was stoked over the chance that Holly was taking to show off her softer side vocally. Alas, it didn’t really pay off. Holly was clearly singing with great sincerity, but she was pitchy and seemed to especially struggle anytime she dipped into her lower register. If I were her, I’d be practicing my Instant Save song tonight.

So, whose performance really wowed you Monday? And who do you think will be up for elimination? Vote in the polls below, then hit the comments.