Riverdale fans, have you been hoping that the CW drama would go ahead and lean all the way into supernatural horror? Your wish has been granted.

Season 6 kicks off this Tuesday (9/8c) with a special five-episode event dubbed “Rivervale,” where things in the idyllic small town are even weirder than usual and Jughead serves as a Twilight Zone-esque narrator. The writers “all love horror and horror movies,” showrunner Roberto Aguirre-Sacasa explains, “and obviously we’ve flirted with horror and things like that in the past, but mostly it’s been about crime and suspense and pulpy stuff. So when The CW asked us if we would be interested in doing a five-part event, I love those things and we’ve never gotten a chance to do them, so we said yes.”

The Riverdale writers “went through all of the ideas of what that event might be,” Aguirre-Sacasa recalls, and “we were asking ourselves, ‘What haven’t we done, and what do people always ask us about?’ And we hadn’t yet ever gone into supernatural horror or overt horror, and it’s something that we’re asked about all the time from our fans, and even from the cast. So it felt like, ‘Oh great, this is definitely the time to do it.'”

The “Rivervale” event has an eerie, unsettling tone that’s beyond anything we’ve seen on Riverdale in the past, and each episode pays tribute to a different horror subgenre, Aguirre-Sacasa hints, “but there is an overarching narrative to all five of them. Episode 1 is folk horror, Episode 2 is ghost stories, Episode 3 is ‘the devil has come to Rivervale,’ and on and on.” 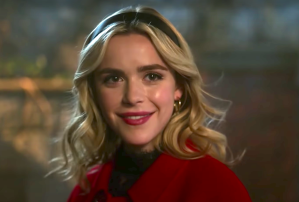 And to make this event extra special, Season 6’s fourth episode features the long-awaited arrival of teenage witch Sabrina Spellman, with Kiernan Shipka reprising her role from Netflix’s Chilling Adventures of Sabrina. “The episode she’s in is amazing,” Aguirre-Sacasa gushes, adding that “it’s a very Cheryl/Madelaine [Petsch]-heavy episode. They had such an amazing rapport, and it felt so natural… It felt both like [it was] worth the wait, and ‘Why didn’t we do this sooner?'”