Monday’s semifinals broadcast of Dancing With the Stars was all about the number two.

Not only was the episode — remarkably! — already the second-to-last outing of Season 30, but it featured two routines from each remaining duo, then wrapped with one last double elimination. (Two is also the number of Kleenex boxes you might have burned through while watching this episode. Everywhere you looked, another sob-worthy contemporary!)

Before we get to the results, let’s break down the season’s penultimate performances:

CODY RIGSBY AND PRO CHERYL BURKE
Each couple’s first dance on Monday was a redemption routine, where they got to take another stab at a style they’d fumbled earlier in the season. For Cody and Cheryl, that was a salsa, which they previously only performed via taped rehearsals after contracting COVID. It was sort of impossible, then, for Cody not to improve with this version, but even his second attempt felt a bit underwhelming; a few of those side-by-sides looked like Cheryl was dancing the salsa but Cody was letting loose in the club, and their final tricks were a tad wobbly.

Then, in their follow-up Argentine tango, it felt strangely like Cody had little to do in the way of actual steps, though he did absolutely nail that opening silhouette. Derek Hough probably put it best in his critiques, though: “Cheryl was working overtime in that routine!” Judges’ Scores: 35/40 (salsa); 36/40 (Argentine tango)

MELORA HARDIN AND PRO ARTEM CHIGVINTSEV
First, Melora and Artem redeemed themselves with a rumba, and Melora brought much more lyricism into her hips and arms this time around. Their real highlight, though, was a contemporary in Round 2: Despite getting saddled with Imagine Dragons’ “Thunder,” which is much too fast-paced a song for a typical contemporary, Melora still brought really moving emotion to the piece, particularly in the eight-count leading up to that final embrace with Artem. Judges’ Scores: 36/40 (rumba); 36/40 (contemporary)

SUNI LEE AND PRO SASHA FARBER
Suni and Sasha got to attempt a foxtrot for their redemption style, which, while a vast improvement over their first showing, ended up ranking among the night’s more forgettable performances. But their second appearance, this time for a contemporary, was much more captivating. Suni communicated her inner turmoil nicely, and it was the appropriate style for her to showcase her incredible gymnastic talents.

I’ll agree with Len Goodman, though, that Sasha could perhaps have choreographed more effectively here: As Sara Bareilles’ “Gravity” built and built, I kept waiting for a more astonishing climax, and that eventual lift with Sasha’s hands clasped around Suni’s head wasn’t quite The Moment I’d been anticipating. Judges’ Scores: 37/40 (foxtrot); 38/40 (contemporary)

JOJO SIWA AND PRO JENNA JOHNSON
If the comment sections of my recent DWTS recaps tell me anything, it’s that you all have some thoughts about JoJo’s continued success on Season 30. But if the smoldering, sensual chemistry of JoJo and Jenna’s redemption Argentine tango didn’t thaw even the coldest of critics, surely their gorgeous, expressive contemporary did the trick. JoJo came into Season 30 with technical dance experience, sure, but her versatility of emotion has been stunning to watch — as was her near-perfect synchronization with Jenna in the contemporary routine’s many side-by-side combinations. Judges’ Scores: 40/40 (Argentine tango); 40/40 (contemporary)

IMAN SHUMPERT AND PRO DANIELLA KARAGACH
First up, Iman and Daniella had a redemption tango, which, thanks to Derek’s mentoring, gave Iman an opportunity to focus on proper frame more than in most weeks of Season 30. (And the difference it made!) And at the risk of becoming even more of a fuddy-duddy than Len himself, I wasn’t particularly enthralled by their jazz later in the show. There was little jazz content there for Iman to master, and the endless lifts — while physically astounding — have lost much of their impact post-Horror Night. Judges’ Scores: 37/40 (tango); 38/40 (jazz) 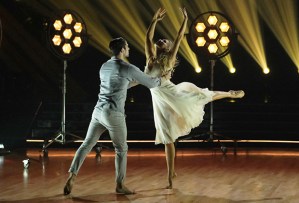 AMANDA KLOOTS AND PRO ALAN BERSTEN
A tango awaited Amanda and Alan in the redemption round first, and it was excellent to see Amanda get intense and unrestrained with her facial expressions after weeks of an often-unconvincing performance smile. As for their Round 2 contemporary — performed to a lovely cover of “Live Your Life,” a song originally sung by Kloots’ late husband, Nick Cordero; I thank the Dancing gods for taking pity on our tear ducts and not using Nick’s vocals — it was breathtaking. I was worried Amanda might not be able to get through the number, given how her face was quivering from the attempt to hold back tears at the beginning. But she ultimately infused the performance with all of that raw emotion, and the result was magnetic. Judges’ Scores: 39/40 (tango); 40/40 (contemporary)

With that, I turn it over to you. How are you feeling about these four finalists? Did Melora or Suni deserve one of those spots instead? Hit the comments with your reactions!