Starz’s hit crime drama BMF has done what no other scripted TV series has been able to do. It brought together Curtis “50 Cent” Jackson, his musical mentor Eminem and rap legend Snoop Dogg.

Jackson, who executive-produces the show, directed Sunday’s Episode 7, titled “All In the Family.”  Meanwhile, Snoop Dogg costarred as Pastor Swift, and Detroit native Eminem made a brief cameo as “White Boy” Rick Wershe.

The installment also featured Demetrius “Lil Meech” Flenory Jr., who raps in real life and stars as his father Big Meech on BMF. Detroit rapper Kash Doll, who costars as Monique, completed the package as the on-again-off-again love interest of Big Meech and his rival Lamar.

“That’s the power of hip-hop,” showrunner Randy Huggins excitedly tells TVLine. “Tell me when five hip-hop stars have been on one episodic drama? You can’t, because it’s never been done. The fact that we had 50 Cent directing? Come on. That’s huge. And he used his connections to pull in his boy Eminem. We’re making history here.” 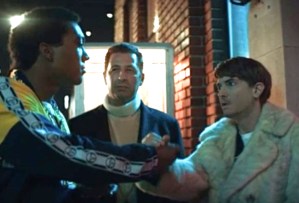 Although Snoop and Eminem don’t interact on screen, Lil Meech appeared in scenes with all of them. In his scene with Snoop, he attended the funeral of his sister’s boyfriend Darius, whom Lamar killed. His lightning-quick interaction with Eminem, in contrast, allowed him to give dap to the 8 Mile star’s White Boy Rick, and he consoled Monique after a wounded Lamar violently attacked her.

Eric Kofi-Abrefa, who costars as Lamar, says having 50 Cent as a director heightened his already edifying experience on BMF. In one action-packed scene from Episode 7, the British actor’s character is shot and nearly killed by drug-dealing competitors. (Lamar is a character amalgamation loosely based on a real Detroit gangster named Layton Simon.) 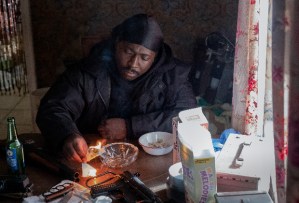 “50 is a generous director who wanted to make sure everybody felt good about what they were doing,” Kofi-Abrefa reveals. “I never felt like I was in harm’s way or didn’t understand where the character was going. Just hanging with Lil Meech, who 50 Cent recruited for the show, was enlightening. His dad would call in sometimes and talk to me about the history and context of his life and family. He told me about the man my character is based on and gave me all kinds of details that I was able to throw in a pot, mix up, and add to my performance.”

For Huggins, BMF, which tells the story of Detroit kingpins the Flenory brothers, is an opportunity to tell a gangster story from a Black perspective set in a very Black city.

“Movies like The Godfather and Goodfellas romanticize crime and gangsters all the time,” Huggins surmises. “The Black community has its own gangsters, and BMF tells the story of two of them and what that looked like and where it all began.”

What did you think of BMF Episode 7 and Eminem’s guest-starring turn? Are you hoping 50 Cent will direct more TV installments? Drop your thoughts in the comments.