Spoiler alert: The following recap reveals what went down on Monday’s 9-1-1. If you haven’t watched, turn back now.

The 41 Most Shocking Cast Exits Announced in 2021

We’ve spent roughly 15 seconds with Michael and David as a couple on 9-1-1, so imagine our surprise when their relationship took center stage in Monday’s episode — for better or worse.

Let’s start with the “better”: When David revealed that he’s going to spend a few months in Haiti to help with hurricane relief efforts, Michael decided he was ready to propose. The whole family threw their support behind Michael, from the kids helping him pick out a ring (“David hates diamonds!”) to Athena putting together the perfect proposal outfit for her ex-husband. Everything was in place for a perfectly romantic evening… until an explosion at the hospital blew his entire plan to smithereens.

Despite being ordered to evacuate, David stayed behind to finish removing a patient’s brain tumor. Bobby eventually made his way into the O.R. to get him out, but he still refused to leave until the procedure was complete:

David: I promised his wife.
Bobby: And I promised your husband.
David: Michael isn’t my husband.
Bobby: Well, he wants to be. He’s standing outside this hospital with a ring in his pocket — or maybe a watch, I’m not sure — waiting to propose. 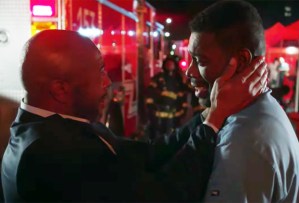 Let the record show, this is the rare — and extremely specific — occasion in which we’re OK with someone spoiling someone else’s plan to propose. It was also in this moment that we fully fell in love with Michael and David as a couple. Fortunately for them, and for us, David was able to finish the operation in time to get out of the hospital. And now they’re engaged! (Come on, did you think he’d say no?!)

That said, we didn’t expect Michael to reveal that he’s joining David in Haiti indefinitely. “I can’t save lives, but I can help rebuild one,” he told his shocked family. Though his ex-wife and children supported his decision, it was clearly an emotional moment. “We will always be family,” Athena told him, triggering a series of nostalgic flashbacks.

Elsewhere in the hospital, a Stage 4 cancer survivor sacrificed his life to rescue his favorite nurse despite Hen insisting that he evacuate, and Buck and Eddie teamed up to save a little boy who was protecting his newborn baby sister. (You know, the same boy who kinda-sorta caused the explosion by bumping into a cart and spilling flammable liquid… not that we’re pointing fingers or anything.) Even though they had different outcomes, both ordeals took an emotional toll on those involved, from Claudette breaking her “no crying at work” rule to Ravi having to read the dead man’s note to the nurse he saved.

Your thoughts on this week’s emotional 9-1-1? Will you miss Michael? Drop a comment with your thoughts below.