The following is a recap of the Call the Midwife finale, which was made available ahead of broadcast to PBS Passport subscribers.

However, when one realizes Nancy had her baby out of wedlock in the 1960s and the nuns who raised her — and later her daughter — kept the whole thing a secret, it’s easier to understand why Sister Julienne didn’t quite know what to do with the aspiring midwife. And as Sister Julienne deliberated, Nancy had to tag along with Nurse Phyllis during Sunday night’s Season 10 finale.

Nurse Phyllis and Pupil Midwife Nancy wound up caring for an expectant mother in her 40s named Blanche. The woman and her husband Walter weren’t trying to get pregnant, but it happened. So Blanche, who already had four teenage daughters of her own, decided to give her baby to her younger sister Sylvia, who couldn’t conceive.

Blanche gave birth to a little boy and an excited Sylvia named him Justin. But when Nurse Phyllis and Dr. Patrick Turner diagnosed the sweet infant with Down Syndrome (or Down’s Syndrome in the UK), suddenly Sylvia didn’t want him anymore. Hurt at first (and then a little relieved because she was having a hard time separating from her newborn son), Blanche swooped in and took back her baby. 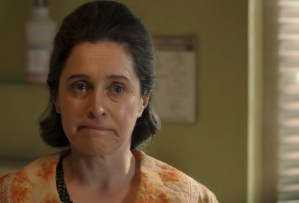 Blanche changed the tot’s name to Robert and shared the good news with her hubby and two daughters, who were still living at home. Blanche and the girls were thrilled, but Walter struggled with the outcome — not just because of the financial burden he could incur via little Robert, but because he worried about the boy’s developmental challenges and social ridicule.

Thankfully, Fred and Violet were there to encourage and support Blanche and Walter, because their cousin Reggie was a well-adjusted young man who was happily thriving despite his Down Syndrome. Fred told Walter that Baby Robert was a blessing and an education, while Violet gave Blanche a ton of beautiful baby clothes and said his birth would transform them into even better people. 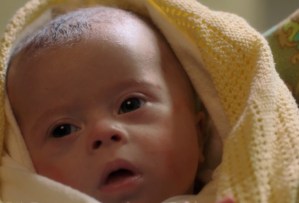 Just as teen mom Jeanette’s adoption woes did in Episode 5, Blanche and Sylvia’s situation sent Nancy into an emotional tailspin. Without thinking it through, she traveled to see her daughter Colette (who thinks Nancy is her big sister), and the head nun wasn’t happy because the visit was unannounced. Matters worsened when Nancy saw a bruise on little Colette’s arm; Colette was so scared of the nun who did it, she refused to tell Nancy her name.

An enraged Nancy hastily took Colette out of the orphanage and the two stayed in a low-budget hotel until Nancy could figure out what to do. When she ran out of money, the hotel manager said she could pay with sexual favors. And when Nancy rejected his offer, he physically assaulted her. But Nancy fought back and got out with Colette just in time.

The two returned to Nonnatus House where the nuns and midwives were sick with worry. Nurse Phyllis fussed at Nancy for acting so recklessly and putting herself and Colette in danger. In a wonderful twist of fate, Sister Monica Joan defended Nancy and said, “The litany of her misdemeanors has been recited aught and not with mercy. … Ask her what it is that she desires.” 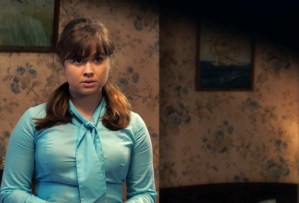 In turn, Nancy said she desired to become a midwife and raise her daughter lovingly and without bruises.

Sister Hilda conferred with Sister Julienne (who was away at a retreat) and told Nancy the good news: She could stay and become a midwife, and Colette could live in a foster home until Nancy graduated. (Call the Midwife? More like call the tissue company, because our eyes are leaking.)

Elsewhere in the finale, Nurse Trixie learned that Matthew is a slumlord but the rich and misinformed widower made things right. This included creating an annual and generous charitable donation to Nonnatus House in his late wife’s name. Also, Cyril and Nurse Lucille decided they are going to get married in Poplar after his grandfather passed away… and Sister Frances killed a rat like a straight up assassin in order to save a baby living in squalor. Isn’t Sister Frances the best?

What did you think of the finale of Call the Midwife and Season 10 as a whole? Grade the season in our poll and drop your thoughts in comments.