Warning: This post contains spoilers from the first three episodes of The Shrink Next Door.

In Apple TV+’s new dark dramedy The Shrink Next Door, psychiatric ethics are thrown entirely out the window.

In the series premiere (three episodes are now available to stream), Marty Markowitz (Will Ferrell) — a naïve, grieving New Yorker whose life is spiraling the drain — takes his sister Phyllis’ (Kathryn Hahn) advice to see a professional therapist. Little do they know that Dr. Ike Hercshkopf (Paul Rudd) will soon completely upend Marty’s life under the guise of being his friend, and from there, it doesn’t take long for the series’ questionable ethics to veer into absurdly unsettling territory.

“I’m going to help you, and everything’s going to be alright,” Dr. Ike tells his new patient in the first episode. “The first thing I’m going to do is completely unethical. I’m going to give you a hug.”

If only Marty could’ve picked up on that huge bit of foreshadowing, it would’ve saved him decades of agita. But rather than trigger his sense of flight, as Ferrell explains, it provided an overwhelming sense of ease.

“When Marty sits down with Ike at the ironic suggestion of his sister, Ike is like the calm in the storm for him,” Ferrell tells TVLine. “He really is soothing and helpful, and gets him to stand up for himself. It’s the first time he’s really had someone in his corner outside of his sister.” (Watch the video embedded above for more from Ferrell and Rudd.) 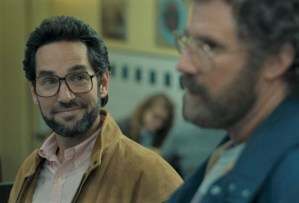 Following a breakthrough Marty has regarding his recently deceased father, Ike convinces him to have a second bar mitzvah to rewrite some of his haunting memories from childhood and celebrate the new man he’s becoming. While Marty is quick to drink the doctor’s Kool-Aid, Phyllis is leery of Ike’s unconventional methods, fearing that a possible bar mitzvah redux will erase the memories they cherished with their dearly departed parents. Dr. Ike seizes this opportunity to turn a small disagreement between siblings into an outright schism. An argument erupts later between the brother and sister, leading Marty to officially uninvite her to the lavish party, which is, of course, thrown entirely on Marty’s dime.

Despite the way Dr. Ike interjects himself into Marty’s closest relationships, Rudd feels the doctor-patient relationship evolves organically and that Ike does hold some very genuine feelings for Marty.

“For a long time, a lot of aspects of this relationship work,” he says. “The approach to the therapy would be considered unorthodox, but it’s beneficial for Marty, early on anyway.”

When Marty reveals that he and his sister share a family trust, Ike’s interest is more than piqued. In the same session, the doc continues telling Marty that the dynamic between him and Phyllis is unhealthy, and that she’s unfairly looking at him to fill the vacant husband role in her life. Things only begin to snowball from there. When Ike sets up Marty’s fabric company with a job producing a backdrop for Broadway, the doctor sticks his foot directly in the door of the business and starts overstepping more than ever, which only raises Phyllis’ suspicions even higher.

In an attempt to better connect with Marty, Phyllis schedules her own session with the doctor. She tells him that a therapist throwing a bar mitzvah for a patient and coming to his place of business is far from normal. Though he begins to charm her and she admits he’s good at what he does, the session does not end well. (Read Hahn’s take on Dr. Ike here.) When Phyllis tells Marty that she met with Ike, he’s appalled and says he’ll no longer enable her. Naturally, she doesn’t take that well, rebutting that Marty’s defensiveness is clearly Dr. Ike speaking. 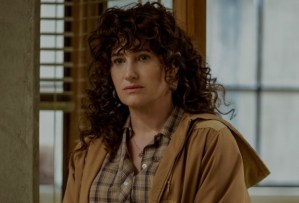 After an explosive fight, Phyllis breaks into Marty’s home safe to lift half a million dollars worth of jewelry. Marty calls Ike for support in the middle of the night, and that’s when he reveals the depths of the family’s inherited wealth to the doctor, which includes a home in the Hamptons, bonds and savings accounts galore. When the two men arrive in Long Island to make sure things are in place, you can almost see the wheels turning in the doctor’s head.

While Ike’s predatory inclinations are certainly hinted at, Rudd explains that to successfully portray Ike, he couldn’t view him as a straight-up villain.

“I was more interested in why people do the things they do and getting to the root cause of that,” the actor says. “Clearly, there are many things he did that you’d say, ‘Well, that’s wrong. That’s inappropriate,’ but to understand why is the interesting thing. I focused on that.”

Your thoughts on The Shrink Next Door so far? Grade the premiere in our poll below, then sound off in the Comments.