The truth came out and a suspect was taken into custody in the finale of Prime Video’s I Know What You Did Last Summer. But was it too little, too late? Uh, you bet!

The season (and possibly series’) final hour began with a whole lot of finger pointing, starting with Dylan going straight to the authorities about Allison stealing her sister’s identity. Unfortunately for Dylan, though, it’s a little hard to take someone seriously when their expletive-laden confession includes references to ketamine. Not only was Dylan doing himself a disservice by acting so erratically, but that also made it easier for Allison to convince Margot that he was behind the killings. (Personally, I don’t trust anyone who’s able to remove an animal brain with such casual precision, so Dylan was already at the top of my list.)

But everything changed when Margot confirmed that the used condom in her bathroom belonged to Dylan. After all, if Allison lied to her about sleeping with him, what else could she be lying about? At that point, Margot was ready to pin the whole thing on Allison and her dad and call it a day… until she later called Allison from Clara’s, claiming that she’d been wrong about everything.

That’s when things got pretty twisted. While searching for Margot, Allison discovered her mother’s dead body, just a few hours after the two came face to face for a long-overdue mother/daughter chat. (When Allison wished her dead, she had no idea how powerful that wish would become.) Someone also knocked out Dylan, which left Allison alone with the real killer: …Margot?! Dun, dun, dun.

As she twirled her proverbial mustache, Margot revealed herself to be behind everything. “She caused so much pain,” Margot said, specifically referring to Allison’s now-dead mom. “I couldn’t let her get away with it.” Margot also made it clear that she didn’t kill for Allison. “I did it for Lennon — the real Lennon,” she said. “The one I loved that you killed!” And she apparently knew the truth long before Dylan spoke out. “I saw it all over your social media when you ghosted me last fall,” Margot said. “Your angles and hashtags were so wrong, it was legit insane.”

Even after stabbing Allison, Margot continued to berate her for lying all this time. “I gave you so many chances to tell the truth,” Margot said. “I low-key told you the goat head was about something else you did. Even after I killed Johnny, who you supposedly loved the most, how could you not fall apart and tell the truth? What kind of person lets everyone else die to cover up their lie?” (That last line was a little judgmental coming from a literal murderer, but OK.)

Dylan stumbled back onto the scene quickly enough to wrestle a gun from Margot, but that only made things worse for him. Because when Lyla showed up in response to Dylan’s dropped 9-1-1 call, all she saw was an unhinged conspiracy theorist pointing a loaded weapon at two unarmed girls. Not a good look. And if you were expecting Allison to corroborate Dylan’s story, think again. She told the police that Dylan stabbed her, and he was promptly taken away in the back of a squad car.

“You realize, you’ve put me in a very bad position,” Margot told Allison during their subsequent ambulance ride to the hospital. “You know what I did… and you chose me. What the f–k is wrong with you? I don’t care what your name is. I’ve never loved anyone more in my life.” 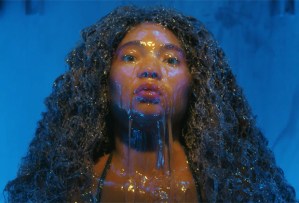 And that, ladies and gentlemen, is how this story ended: Dylan is locked up, falsely accused of being a serial killer, while Allison and Margot get to flaunt their love all over Hawaii. Then again, is it really over? Because the final moments of the episode revealed Riley to be very much alive!

What did you think of the IKWYDLS finale? Did you predict the killer before she was revealed? Grade the finale and season in our polls below, then drop a comment with your full review.