Warning: This post contains spoilers from the Season 1 premiere of Paramount+’s revival of The Game.

The Game may have switched its setting from San Diego to Sin City, but the football dramedy you know and love is back at it.

The Paramount+ revival debuted Thursday with a two-part premiere, titled “A Taste of Vegas,” that saw Malik grapple with his mental health and reluctantly agree to play one more year in the NFL so he can become a minority owner of the Las Vegas Fury.

The show introduced a more vulnerable side of the football vet, who’s been hallucinating his deceased college friend Caleb. After a thorough physical evaluation, a doctor determined that Malik was in good physical health and suggested that what he’s experiencing might be stress-related.

It’s the start of a season-long journey for the famed footballer, who will continue to grapple with seeing his dead friend while also dealing with the stresses of playing one more season of football to fulfill a longtime dream.

“In general, mental health is something that is so near and dear to all of us, but it’s something that hadn’t been discussed as much as it should be on television and film,” Hosea Chanchez, who plays Malik, tells TVLine.

Malik is “grappling with his reality,” he adds. “His entire journey this season will stem from what it means to be a Black man, an athlete, a human being in a time where… it’s not OK to take breaks or check in with yourself, or to ask questions about what you’re feeling or what you’re going through. I’m really excited to peel those things back with the audience and be a part of that conversation.” 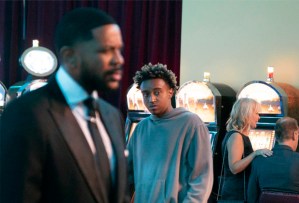 In a serious conversation with his mother and manager Tasha Mack, Malik shared how he’d been feeling — that he’s stressed and really missing Caleb — but denied hallucinating his dead friend.

“She has no idea [about Malik’s hallucinations],” Wendy Raquel Robinson, who plays Tasha, says. “Sometimes, we don’t even stop to look in plain sight at what’s happening right in front of us. Because we’re so busy doing us, we don’t take the time to really look around and see what’s happening.”

When it comes to Malik’s story this season, Chanchez wants to “break down the misconception that men don’t have feelings or that somehow our feelings are invaluable or secondary or even nonexistent.” This season, fans will see a more grounded Malik who “receives and expresses things a lot different than he had before because his senses are different.”

“I couldn’t play a character post-COVID unless the character had experienced everything that the world has experienced. He didn’t get COVID, but we’ve all changed. The world has changed, and so in that change, it has to be reflected in my character,” Chanchez explains. “It’s a more emotional and vulnerable character that I hope people get an opportunity to see, along with dealing with his mental health issues.”

Robinson notes that “one thing that quarantine and COVID did, it really brought [mental health] to light, and you really see not only the lack of resources, but the lack of support that’s really out there for African Americans and people of color in general. I’m so proud that we not only tackle it, but we also get a healthy alternative and how to deal with it without being preachy. It’s going to really hit some hearts to the core, as it did mine, just to see what he’s going through and the effort that it takes to hide it, the energy that it takes to hide it, and suppressing it really metastasizes it even more.” 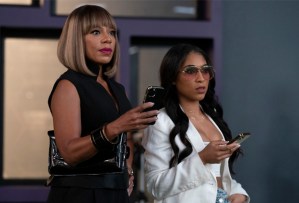 The season opener also brought us up to speed with Tasha, who’s been living large as the CEO of her own sports management company and is struggling with being extremely career-driven and making more time for her husband Pookie and their eight-year-old daughter. Plus, she has now taken her best friend Kelly Pitts’ daughter Brittany (who’s nearly a million dollars in debt) under her wing.

“It’s a relationship that’s kind of hell-bent, but at the same time, it’s so necessary and refreshing. The story is really told through [Brittany’s] eyes. Adriyan Rae [who plays Brittany] really bring so much to the character, and that dynamic is fun,” Robinson shares. “I call this the season of learning curves… But it’s also a season of second chances. You can’t just toss in the towel on somebody. [Brittany] gets a second chance, and I’m getting a second chance at love, life, balance of relationships.”

This season, viewers will get to see newcomers like Tasha’s new client Jamison Fields (played by Vaughn Hebron) “interact in this world that you guys have gotten to know so well, and I think they’re going to surprise and delight you,” Chanchez teases.

According to Robinson, the show will also tackle everything from sexism to ageism to black hair in the community to what it’s like being a woman — let alone a Black woman — navigating this world of sports and holding to your dreams: “There’s a little bit for everybody.”