Season 8 of The Flash opens with a five-episode event in which Barry Allen & Co. try to avert Armageddon. But the bigger twist is what — or namely who — causes this future cataclysm. 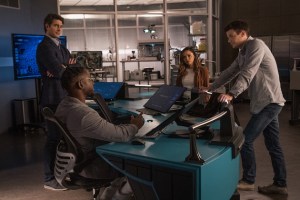 TVLine spoke with series lead Grant Gustin about how the Flash five-parter compared with traditional crossover events, the surprising cause of the eponymous Armageddon, and more.

TVLINE | How is life for Barry when Season 8 opens?
Life is good! The kids [Nora and Bart] have gone back to the future, to 2049, and our theme when we pick up is that we’ve all “leveled up,” so we’re seeing this version of Barry that I’ve hoped for for a whole now. He’s feeling a little more confident, he’s really coming into his role as a leader. He still depends on the team but is taking on a leadership role more so than we’ve seen in the past. Barry and Iris are in a good place, life is good, which feels like the start of a season — and as we all know, it will probably get flipped on its head pretty quickly. [Laughs]

TVLINE | Is there any indication that Barry and Iris are still quote-unquote “trying” to start a family?
Yes. Subtly, yes. Quickly, there’s too much going on to touch on that on a regular basis, but in the premiere it’s still a theme. It’s acknowledged.

TVLINE | How do we get the first whiff that Armageddon is coming?
We’re dealing with the Royal Flush gang, who first showed up [on The Flash] in Season 1, I believe. They’ve also kind of leveled up, but Barry is handling them pretty easily. Then, towards the very end of the episode, Despero shows up for the first time and essentially says that Barry is going to be the cause of the Armageddon to come. Barry first of all is in disbelief and tries to tell Despero that this is just not possible, but there’s enough evidence that Despero gives to leave Barry pretty concerned that this future is something that might end up happening. 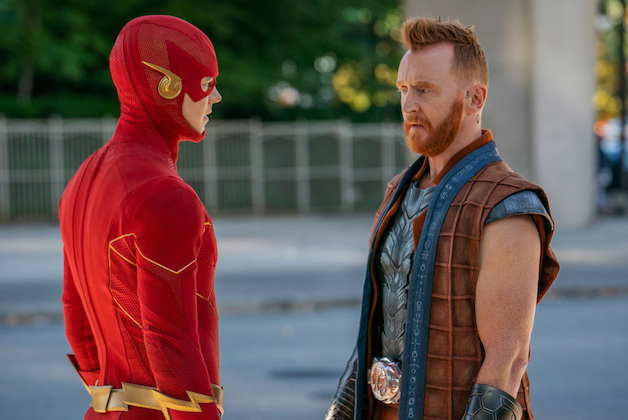 TVLINE | What kind of alien is the awesome Tony Curran giving us? Is he regal, is he a smart-ass, is he badass…?
Tony is everything, man; I had so much fun working with him. It’s cool because we’re going to see a human side of Despero and an alien side. I haven’t seen what the final product is going to look like, because I was working with a human with dots on his face at times, but Tony’s performance is awesome. He’s badass, but he’s one of those villains where you understand where he’s coming from, because it’s all grounded in a truth for him.

TVLINE | What I’ve been trying to figure out, ever since this event and the casting was announced, is: What skin do Damien Darhk and Eobard Thawne have in the game?
Well, we’re going to see a couple of different timelines, I guess you could say. It’s cool, it’s a bit of an alternate reality that we’re going to be in. That was another thing, I had a blast working with Neal [McDonough} and Tom [Cavanagh]. I had never worked with Neal before, and their parts in our storyline are integral and pretty cool.

TVLINE | I keep referring to this as as team-up event, but is it more like a progressive dinner? One week Barry visits Black Lightning, the next he visits somebody else…?
No, we see Ray [Palmer] first, which is fun because it’s just two old friends catching up for a while, until Despero shows up. But then Ray has to leave, and as we start to see other characters throughout the “Armageddon” event, it’s actually more like a true crossover at times. It’s not just standalones. We’re going to see a lot of different characters in the same episodes in the same scenes at the same time.

TVLINE | Will we spend some time in the Hall of Justice?
We will, yes! That’s where Barry and Jefferson/Black Lightning meet up for the first time [in the five-part event].

TVLINE | Being five episodes of your own show, did this end up being more manageable for you than the traditional, grueling annual crossover event?
Yes, and no. I would say that for production this was a lot easier to make happen on paper, because it wasn’t balancing five shows’ schedules and figuring out how to get all these different actors on different shows. I’m sure it was harder on people like [Batwoman‘s] Javicia who have full schedules on their own shows and are coming over to guest-star on a different show — I’ve been there, so I know.

So for me it was easier, since everybody was coming to us. But also, I had missed the first two weeks of filming because we had just had our baby [Gustin and wife LA Thoma welcomed a baby girl in mid-August], and then my schedule was jam-packed for about six weeks. It was kind of the most challenging stretch of Flash I’ve had since Season 1, as far as the schedule was concerned. But it was cool — it definitely felt like a crossover event, but it all took place “at home” for us.

Want even more scoop on The Flash, or for any other show? Email InsideLine@tvline.com and your question may be answered via Matt’s Inside Line.