Like Caroline, Elena and so many other rebellious bloodsuckers before them, Hope enjoyed her first taste of inhumanity on Thursday’s Legacies, forcing “cool” Aunt Rebekah to intervene and transition into the worst thing of all: “an old.”

TVD, Originals and Legacies: 25 Actors Who Crossed Between Shows

“Dear God, please tell me I’m using that word right,” Bex said shortly after lecturing Hope for snacking on an unsuspecting townie. And although Rebekah agreed to share the blood bag with her niece, the two Mikaelsons didn’t see eye to eye on much else. Specifically, Hope wasn’t ready to embrace life among the undead, much less agree to feel the pain of losing Landon all over again.

Hope even had the audacity (the gall!) to imply that Rebekah was a hypocrite because of how vocal she’s been about wanting to become human. Apparently Hope forgot that her aunt has done the whole vampire thing for more than a thousand years, but Rebekah was happy to remind her. “I was envious when Niklaus and Hayley had the miracle that is you,” she said. “But I would give you the cure if you wanted it.” Still nothing.

Fresh out of ideas, Rebekah resorted to the oldest trick in the Mikaelson handbook: daggering Hope and dumping her in the trunk of a car. Little did Bex know, there was a third vampire in the vicinity, one who knocked her out with a quick snap of the neck (another classic move!) before reporting back to his mysterious British boss.

Just then, another plot twist! Hope appeared from behind the bar, revealing that daggers apparently aren’t super effective against tribrids, and pumped her kidnapper-to-be for information. The guy didn’t look like a snitch, but he basically told Hope everything. “Destroying you is the only thing all three factions agree on,” he told her. Heck, he was even going to give up his boss’ name before he spontaneously combusted.

Before hitting the road to get the jump on whoever is trying to kill her this time, Hope had one last family matter to deal with. Realizing that Freya must have secretly charmed her necklace, thus enabling Rebekah to track her down so easily, Hope shed the family heirloom. Rebekah made one last attempt to appeal to her niece, once again bringing up her father, but it was no use. Brace for heartbreak:

Hope: He’s dead. And you know what killed him? Family. Love. Me. So maybe you should try to stop being like him.
Rebekah: You’d do well to take your own advice.
Hope: That was a warning. So if you care about our family, stay away from me. I am my father’s daughter, but I won’t make the same mistakes.
Rebekah: He’d be so ashamed.

Part of me is crushed by the fractured state of the Mikaelson family, but another other part of me knows that “fractured” is what the Mikaelsons do best. So here’s hoping Rebekah denies Hope’s request to keep her distance, thus roping a few more family members back into the fray.

* The Saltzmans gave the Mikaelsons a run for their money with family drama this week. The doctors treating Alaric at the hospital didn’t know what landed him there, so MG took the Saltzmans on a tour through their dad’s subconscious to learn the truth. Once they realized that Hope was responsible — and after Josie convinced Lizzie that hunting down a tribrid would be suicide — the journey into Alaric’s mind continued, this time to find him and pull him back out. What unfolded was more tragic than anyone could have predicted. Lizzie found Alaric in the memory of her and Josie’s birth, which was apparently the happiest day of his life, something he never told her. As he explained, it was a “complicated” delivery. (“There was a huntress and heretics, and you and your sister siphoning your mother from her womb.” You know, the good old days!) 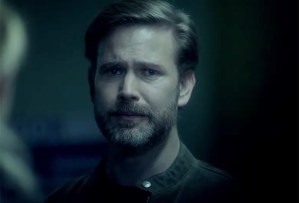 But Alaric had no intention of returning with Lizzie. Believing this to be the end of his life, he took one last opportunity to apologize to Lizzie for his perceived failings as a father, including believing that Hope wouldn’t turn out like her father. So, what exactly happened to Alaric? That’s the million dollar question, one Lizzie intends to solve. I mean, there’s dead and there’s “dead,” and I’m pretty sure Alaric has been both before. I have faith.

* Lizzie, MG and Ethan might have the most mature love triangle in Mystic Falls history. After putting it off for so long, MG found the courage to tell Ethan that he’s the “other guy” in Lizzie’s life — something he apparently already knew. “Is that going to make things weird between us?” MG asked. Because the day’s going to come when I tell her exactly how I feel.” Ethan suggested that they “jump off that cliff when we get to it,” and even then, he doesn’t foresee it ruining their friendship.

* Rebekah may have been this week’s biggest guest star, but I also appreciated hearing that Caroline is “halfway down the Congo” looking for a way to save Lizzie and Josie. When it comes to Vampire Diaries references, I will clearly settle for crumbs, so don’t even get me started on MG’s casual mention of Stefan’s old bedroom.

* Speaking of references, was I the only person hoping for a Marcel update? Are they even still engaged? I guess we’ll save that one for Rebekah’s next visit.

OK, let’s share our thoughts on this week’s extremely eventful hour: Was Rebekah’s visit everything you hoped it would be? Any theories about the woman on the phone? And how are we feeling about Alaric’s “death”? Drop a comment with your take on the episode below.