After three seasons on The CW and another six on BET, The Game is back on when new episodes arrive this Thursday on Paramount+.

The revival, which moves its setting from San Diego to Las Vegas, will explore Black culture through a football lens as the show’s key players grapple with “racism, sexism, classism” and more while also fighting for “fame, fortune, respect and love,” according to the official synopsis.

Series OGs Malik Wright and Tasha Mack will also be back and leading the charge in the new season. Wendy Raquel Robinson, who plays Tasha, reveals that she had reservations about returning to her larger-than-life character before joining the revival. 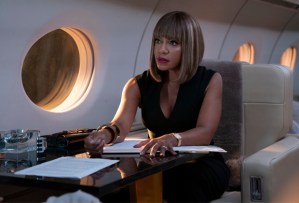 “I did have an initial trepidation because it’s been about an 18-year journey, off and on, of my life,” she tells TVLine. “I’ve never had a character that I’ve portrayed that has been so multifaceted, so multi-dimensional, so flawed, so funny… To see her unravel, to see her gain everything back — it’s a journey of a lifetime, so I could not not do it. And working with new writers and having their interpretation of this character added onto it, it was just a win-win and a no-brainer for me.”

Hosea Chanchez, who plays Malik, also admits that he wasn’t entirely sure about returning to his character until conversations with executive producer Mara Brock Akil (who created the original series) and showrunner/writer Devon Greggory changed his mind.

“I just didn’t see it… I was like, ‘OK, I’ve done that. We did it, [and] we did it really well,’” he shares. After speaking with producers, however, he realized that, “‘wow, there’s a lot more here for me.’” Chanchez will also be more heavily involved this time around. In addition to starring, he’s also a producer and is set to direct an episode this season. “It’s a completely different involvement now than it’s been before,” he adds.

The Game picks up eight years after the series finale, with Tasha Mack struggling to balance her hectic work life with being there for her husband Pookie and daughter Kai.

“I’m trying to juggle [being a] mom, life, love, career, being a boss, being a Kris Jenner, and it’s a struggle,” Robinson explains. “You see the parts of Tasha that have it all together, but then the other parts of Tasha that really have to make that sacrifice, not only for her child, but for her future… You’re going to see a very different Tasha who’s grounded but still trying to find the love in her marriage. I’m still married, but how married am I? Because she’s so career-driven.” 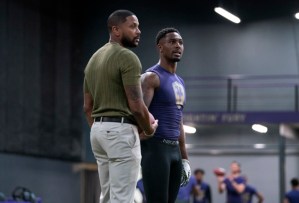 New episodes will also explore a different side of Malik, who is more mature and focused than in the original series. “He is a man on his journey for his purpose,” Chanchez notes. “In a lot of ways, Malik was the character who hadn’t had a full life on the series. For me, he was the one character that still needed development in some ways, whether that be maturity or finding a home life or family life for himself.”

For Chanchez, uncovering new layers to Malik is what made it worthwhile to return: “I’m so shocked and surprised that there are still layers and levels to go, but then when you think about it, that’s the way life is,” he says.

The upcoming episodes will bring both the comedy and the drama, but don’t expect to see another musical moment like Tasha singing Rihanna’s “Take a Bow” to Rick Fox in Season 3.

“Can I tell you how petrifying that was for me, the actress who does not sing? So I’m in my head about that, and I’m the biggest fan of Rihanna. Then it’s Rick Fox, as gorgeous as he is, in my face,” she recalls of the iconic scene. “But what I love about Tasha is when you step into those shoes, you cannot second-guess it. It’s ‘commit to the bit’ all the way, or the audience can tell when you’re not committed.”

Although Robinson won’t sing in the new season, Robinson notes that there are “definitely some really poignant and standout moments.”

“The comedy is grounded in truth and reality, but at the same time, those big, over-the-top moments come,” she adds. “They come surprisingly, but [not] as often, so when they do, they will be even more memorable.”