As Robyn solved a Don’t F**k With Cats-style stalking case on the Nov. 7 installment of CBS’ The Equalizer, Aunt Vi and Delilah dealt with a villain of their own, at a retail store.

The trouble began when Aunt Vi and Delilah (played by Lorraine Toussaint and Laya DeLeon Hayes) decided to do some light shopping at a neighborhood boutique before going to see a movie. Aunt Vi spotted a Bohemian robe that was just her style and as she removed it from the rack, a crazed Karen approached her and said she had reached for the robe first.

Aunt Vi said the woman was mistaken, but the irate shopper refused to move on and tried to snatch the piece of clothing from Aunt Vi’s hands. When Robyn and Delilah’s aunt defended herself, the woman claimed Vi assaulted her and called the police. Officers arrived and immediately took the woman’s side, saying she could press charges against Aunt Vi — until Delilah showed them the video on her phone that proved the woman had instigated the entire conflict.

Later, when the pair told Robyn (played by Queen Latifah) what happened, Aunt Vi explained how white women weaponizing the police is a form of racism Black people will have to fight against until it stops. Although Delilah listened to her aunt and didn’t post the video that night, she ended up sharing it when she approached the woman on her job the next day and she turned out to be as rude and racist as ever.

“The moment Queen Latifah stepped into the role as The Equalizer, we knew we would find ways to address race whenever and wherever we could,” Debra Martin Chase, who exec-produces the procedural alongside Latifah and Castle creators Terri Edda Miller and Andrew W. Marlowe, tells TVLine. “She’s a Black woman and there are things that happen to Black people we don’t want to ignore on this show.” 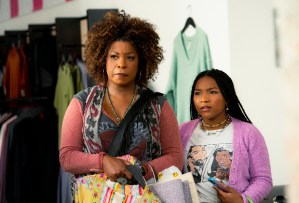 Toussaint, who plays Aunt Vi, agrees and says that the Nov. 7 installment, and Season 2 as a whole, shows that Aunt Vi and Delilah will sometimes have to fight their own battles.

“Robyn is great at what she does, but she can’t be there for her family every minute of every day,” Toussaint explains. “What happens when she’s not there? That’s what we’re exploring — her family’s resilience, and their ability to save themselves when they have to save themselves.”

DeLeon Hayes’ Delilah dealt with a few instances of racial prejudice in Season 1. The difference in Season 2 is her ever-growing refusal to be a victim, because both her mother and Aunt Vi are teaching her smarter ways to fight back.

“We don’t get to see that a lot on television,” the teenage actress observes. “The fact that we get to show Black women doing, especially on network TV, is so important.”

What did you think of Aunt Vi and Delilah’s Karen takedown on The Equalizer? What other battles do you want to see them win? Drop your thoughts in the comments.