With the names of comedy heavyweights Will Ferrell and Paul Rudd above the title, you’d probably expect Apple TV+’s The Shrink Next Door to be a silly laugh riot. But fair warning: It is not.

The episode running times are actually a clue: The premiere is just 35 minutes, like a comedy, but later episodes stretch out to the 50-minute range as it ventures further into dramatic territory. Putting a nasty spin on the ’70s self-help era, The Shrink Next Door — premiering this Friday, Nov. 12; I’ve seen all eight episodes — upends our expectations by using Ferrell and Rudd to deliver a surprisingly dark psychological dramedy with seriously creepy undertones.

Based on true events that were turned into a popular podcast, The Shrink Next Door starts back in 1982, where we meet Marty (Ferrell), a kind and gentle but hopelessly naïve schmuck who runs his family’s fabric warehouse. Even a mild confrontation sends Marty into a debilitating panic attack, and his sister Phyllis (WandaVision‘s Kathryn Hahn) wants him to see a therapist. She sends him to see the bearded Dr. Ike (Rudd), who makes it his mission to help Marty find some confidence: “You let people take advantage of you.” 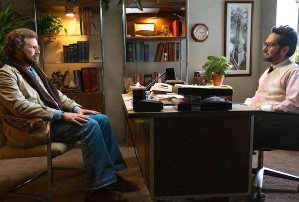 There are some early red flags, though: Ike hangs out with Marty outside the office… but then charges him for that time. He gradually creeps into Marty’s life — and his wallet. (Marty is richer than he appears, with Swiss bank accounts and a house in the Hamptons, and you can almost see the dollar signs light up in Ike’s eyes when he learns this.) Ike is a born schmoozer with a taste for the finer things, and he has no problem using Marty’s money to acquire those things. As Ike slowly bleeds Marty dry over several decades, he pummels his patient’s psyche with a barrage of bullying taunts and shameless guilt trips. “Why the need to claim things?” he asks when Marty dares to let it slip to a guest that the Hamptons house is actually his. “It’s unbecoming.”

There are tiny moments of comedic flair here — Marty gleefully painting his office to the Laura Branigan pop hit “Gloria” is a highlight — but mostly, this is an odd story, and a sad one. (Writer Georgia Pritchett hails from Veep and Succession, so she’s well-versed in sharply savage dark comedy.) It’s almost like What About Bob? in reverse, with the therapist becoming attached to his patient like a parasite. Phyllis starts to worry about Ike’s influence on Marty, and Ike drives a wedge between the siblings, with a tug of war that puts Marty in the middle. It’s a slow burn, and not exactly a barrel of laughs along the way, but it is strangely engaging throughout, getting scammier and more uncomfortable with each passing episode. 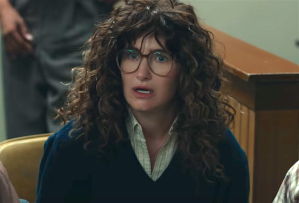 It helps that all three stars are superb. Ferrell and Rudd have a strong rapport honed over years working together on comedies like Anchorman, and that carries over here, with both clad in early ’80s eyeglasses and beards. (If nothing else, this show is a comprehensive survey of bad ’80s fashions.) Ferrell is not as goofy as usual, but he does some of his best dramatic work as Marty, with his kind eyes and sweet demeanor earning our sympathy (and pity). Rudd puts his natural charms to devious ends as Ike, showing a surprising menace when his dark side comes out. And as Phyllis, Kathryn Hahn continues her streak of making every TV show she’s in significantly better; just hearing her say “racquetball” in her ’80s Upper West Side Jewish accent is a treat.

Hahn disappears in the middle episodes, though, and Casey Wilson is underused as Ike’s wife as well. With just Ferrell and Rudd left to play off each other, it becomes a little suffocating. The story gets stuck in a holding pattern, hitting the same beats again and again. (This easily could’ve been a two-hour movie.) I kept waiting for all of this to build to some kind of climactic conclusion, but by the time it does, it’s ultimately unsatisfying. As creepy as Ike’s obsession is, it never gets creepy enough to be truly unsettling. All in all, though, it’s worthwhile just to see Ferrell and Rudd expand their acting ranges a bit and delve deep into a story that’s so strange, it has to be true.

THE TVLINE BOTTOM LINE: Will Ferrell and Paul Rudd get surprisingly serious — and it works — in Apple TV+’s intriguingly creepy The Shrink Next Door.