With Monday’s episode, Season 21 of The Voice went live, teeing up make-or-break performances by the Top 20 — though I expected a Top 21, to be honest. After last week’s reveal that viewers could vote for a coach-picked contestant to return to the competition — either Team Ariana Grande’s Vaughn Mugol, Team Blake Shelton’s Hailey Green, Team Kelly Clarkson’s Aaron Hines or Team John Legend’s Samara Brown — I thought extra space would be made for a comeback kid. Not yet, apparently. (Tuesday, during the Wild Card Instant Save.) Keep reading, though, and we’ll discuss all of Monday’s performances.

Girl Named Tom, “Creep” — Grade: B+ | At this point, I’m convinced that the trio could sing their ABCs and make them sound gorgeous. Radiohead’s classic didn’t seem like the best-ever song selection for them, but they were still beyond good enough to easily survive Tuesday’s cuts.

Katie Rae, “Stormy Weather” — Grade: B | After being stolen from Ariana, Katie delivered a nicely nuanced cover of the golden oldie. She went from smooth to raspy and back as easily as you or I might change channels. “Incredible job,” declared Kelly. Still, I had a hunch she’d be in trouble Tuesday. Has she really resonated with you — or anyone in the audience?

Gymani, “Say Something” — Grade: B+ | OK, now this was a performance that from the start made you stop in your tracks and go, “Whoa, what’s this?” Gymani was so in control, so commanding a presence, I made like six typos trying to live-type this review. I do wish, though, that the performance — or maybe it’s just the song? — had gone somewhere. 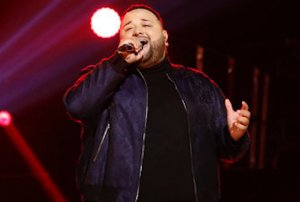 Jeremy Rosado, “When I Was Your Man” — Grade: B | I’m really torn about Jeremy’s effort. Heaven knows it was impressive hearing him dump out his entire bag of tricks on that stage. But he felt a little “rushed,” and in the end, like the parts were greater than the whole.

Hailey Mia, “Traitor” — Grade: A- | I kept watching the season’s youngest contestant for nerves, and I’ll be damned: I didn’t see any. Moreover, I didn’t hear any. Hands down, she gave the most impassioned performance of the evening, at least so far. Pretty good start to the night, no?

Shadale, “Love On the Brain” — Grade: B | Oo, this is a toughie for me to judge, because I remain so enamored of Chris Blue’s rendition. Shadale was a compelling presence on stage; I couldn’t take my eyes off her. But I wasn’t as wowed as I hoped to be by her vocal. Very good? Yes. Great? Not quite.

Joshua Vacanti, “You and I” — Grade: A | Definitely the most interesting performance thus far. But Joshua isn’t just an odd duck in a world of swans. He’s got a massive voice, on which he somehow managed to keep the reins, and a playful stage presence that made him as enjoyable to watch as to listen to. 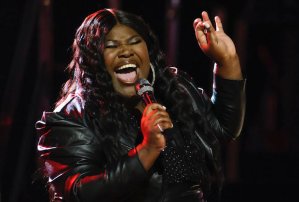 Jershika Maple, “Beggin’” — Grade: B- | The moment Jershika opened her mouth, my jaw hit the floor. Unfortunately, the performance — as raucous as it was — underwhelmed. It was big, which I love, but sorta yelly, which… do any of us love? I agree with Jershika’s coach that she’s phenomenal. This number just wasn’t the best showcase of her phenomenal-ness.

Samuel Harness, “So Sick” — Grade: A+ | Ne-Yo’s hit might not have let Samuel show off as much as another song could’ve, but [bleep], the guy sings with — and just radiates! — such intensity, he still managed to turn it into a total winner.

David Vogel, “Slow Burn” — Grade: C | Technically speaking, there was nothing wrong with David’s Kacey Musgraves cover. There just wasn’t anything about it that was going to make you remember it tomorrow. He didn’t even throw in a good hair toss to reel in the heartthrob vote.

Raquel Trinidad, “Don’t Know Why” — Grade: C | Huh. This was probably my favorite performance by Rachel all season. Still didn’t love it, but I could at least appreciate how honey-soaked a lot of her vocal was. She just tends to sound almost there rather than all-the-way there.

Jim and Sasha Allen, “Hey Jude” — Grade: D+ | Aww. Sasha is such an adorable puppy of a person, I wanted to love this. And at first it seemed like he and his dad were going to nail it. But soon, it became apparent that their harmonies weren’t quite going to sync up. When finally, the Beatles cover went completely off the rails, I suspect the duo couldn’t see the tracks from where they wound up. 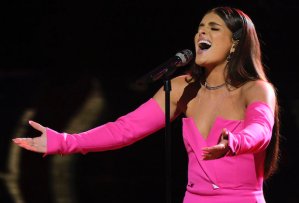 Bella DeNapoli, “The Sweet Escape” — Grade: D- | Oh, no, no, no. Poor Bella. She’s a really good singer and started her Gwen Stefani cover with such finesse that I thought we were in for a treat. We were not in for a treat. Her performance turned into such a screechy train wreck that when Blake said she’d made the song her own, you could’ve convinced me it was because she’d ruined it so badly, Gwen didn’t want it back.

Ryleigh Plank, “I’m Your Baby Tonight” — Grade: D | Well, she was spirited, I’ve gotta give her that. And she was able to hold my attention on stage. But Ryleigh’s Whitney Houston cover was so all over the place, I couldn’t have followed along if I’d had a map. And that last note… ugh. WTH is happening to Team Ari?

Holly Forbes, “Torn” — Grade: C+ | This worked… well, mostly. Holly cued up a rendition of Natalie Imbruglia’s hit that was pulled way back instrumentally even as she surged forward vocally in her trademark overwrought style. And, for the most part, it landed just fine… until Holly veered into the kinda ouchy pitchiness that, were this the Blinds, would’ve kept an auditioner from getting a chair turn. Not a great showing for Team Ari.

Peedy Chavis, “Proud Mary” — Grade: C | Dressed like Danny Zuko from Grease, Peedy woke the house the hell up with his rollicking performance. And to his credit, his vocal didn’t much suffer, despite his running around the stage. But that vocal was just OK; he could’ve been the lead singer in any of a million retro cover bands. Was it just me, or by this point, did it feel like the Playoffs were going downhill? 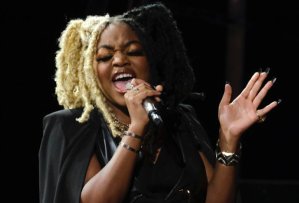 LiBianca, “Woman” — Grade: B- | There were some notes in there, especially toward the end, that made me go, “Did she mean to do that?” But overall, LiBianca was solid — slinking around like Catwoman while rolling out a vocal that was as smooth as crushed velvet.

Paris Winningham, “I Wish It Would Rain” — Grade: A | A portrait of confidence in that spotlight, Paris made his coach glad all over again that he stole him from John. He wasn’t just a total pro, he was the kind of total pro that you would totally believe was about to put out his second Greatest Hits collection. Polished, passionate, perfect. (Even if yeah, I still preferred Samuel’s performance by a hair.)

Lana Scott, “Next Girl” — Grade: B | Turning loose a vocal that fell somewhere between Dolly Parton and E.G. Daily’s, Season 21’s one and only country singer gave a thoroughly engaging performance that was as delightful in the ears as soda pop is on the tongue. 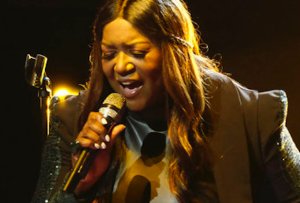 Wendy Moten, “I Will Always Love You” — Grade: A | It will come as a shock to absolutely no one who has ever heard Wendy that she absolutely slayed her Whitney Houston cover — to the point that her coach admitted that he wanted a victory more for her than he ever had any other contestant. But I’m sticking to my guns; Wendy’s a goddess, no doubt, but I still found Samuel more compelling.

So, who do we think is finito as of Tuesday? And who really impressed you Monday? Vote in the poll below, then hit the comments.