9-1-1 celebrated Halloween a week late with an episode about ghosts, mostly of the metaphorical variety.

Let’s start with the latest update on Maddie-gate: A phone call from Chimney revealed that he was en route to Boston, following Buck’s deduction that the song he heard in Maddie’s phone call came from the bells of the Old North Church. Buck’s theory (if you can call it that) was that Maddie was happiest in her marriage to Doug when they lived in Boston, since they were both too busy with school to ever actually spend time together. Bleak!

Chimney began to worry that he was just “chasing ghosts,” and it didn’t help when Hen reminded him that there’s a replica of that very same church in Burbank, something that apparently “never occurred” to Detective Buck. But when Chimney arrived in Boston and immediately encountered a woman with a child who wasn’t breathing, he knew he was in the right place. Not only did Chimney save the baby’s life, but the paramedic who arrived shortly thereafter turned out to be Eli, a familiar face from “Chimney Begins.”

The old friends grabbed drinks and broke down the whole Maddie situation, with Chimney ultimately accepting blame for choosing to believe her when she said she was OK, rather than pushing her to be honest. Eli’s advice, more or less, was for Chimney to get his s–t together. “Take a minute, take a breath and pull yourself together,” he said. “When you do find her, you can be the Howie that she needs.” (The question is: Was that advice actually helpful, or was it just a way to stretch out this little quest even more? You decide!)

Other hauntings worth our time… 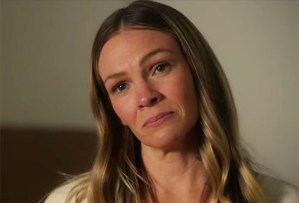 * Hen’s ghost came in the form of Eva, whom she agreed to meet at the firehouse. With tears streaming down her face, Hen denied her ex’s request for forgiveness, as some wounds take more time to heal. Karen was furious to learn about this little rendezvous, insisting that Hen is blind to the fact that Eva will never change. And it didn’t end there. Karen confronted Eva at her home, wasting no time asking the big question: “Why do you keep trying to blow my life apart?” Eva explained that Hen was the first person to ever really see her, then said exactly what Karen needed to hear: “Hen is never going to leave you because Hen loves you more than me.” Karen then explained to Hen that Eva has been like a shadow hanging between them all this time — and she’s finally gone.

* Meanwhile in the Grant household… Not only is Harry still suffering from PTSD after his kidnapping, but Michael discovered that his son has apparently been spending some time on a Jeffrey Hudson fan site. His obsession even brought Harry back to the scene of the crime, where he injured himself and had to call Athena. Having previously felt abandoned by her, Harry was pleasantly surprised that she would immediately leave work to help him, to which she promised, “You always come first.” Harry also had an important heart-to-heart with Lou, who gave an inspiring (and effective!) speech about moving past trauma. It didn’t fix everything, but with Harry back at home with Athena, things are definitely looking up.

* It seems that Taylor is also being haunted by a ghost from her past, one she’d rather not tell Buck about just yet. When he suggested that she’s taking too many risks at work, she snapped back about how “the truth is worth everything.” Sensing her agitation, he pressed Taylor to explain herself, but she pulled back. “I don’t know, unsolved mysteries just never sat right with me,” she said with a shrug. But while Buck slept, Taylor pored over an article about a doctor in Arkansas who pled innocent to a murder conviction. Does anyone else smell a “Taylor Begins” episode on the horizon?

Your thoughts on Chimney’s fated encounter? Karen finally side-stepping Eva’s shadow? Taylor’s potential backstory? Whatever’s on your mind, drop it in a comment below.