This Sunday, as what is now Paramount+’s SEAL Team concluded its three-part SGS/West Africa arc, Jason made a questionable call in the name of locating Mandy — but was it too little, too late?

Picking up where the military drama’s first exclusively Paramount+ episode ended, Bravo (plus GB strap Remington) found their two vehicles bathed in fire from a flurry of molotov cocktails. But rather then try to flee the vehicles and be sitting ducks in the alley, Jason ordered everyone to drive ahead, for a vehicular breach of the target location. Once inside, they made their way up the stairs toward Boukare, but landed in a hallway firefight. Thanks to Brock flanking the tangoes, Bravo gained the upper hand, after which Jason sent Ray and the others downstairs — so that he and Clay could grill Boukare and one tango about the location of warlord Aziz Sankara (and thus hopefully also Mandy). 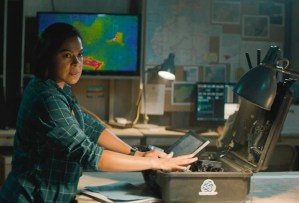 Boukare was steadfastly silent, but his minion appeared to have information. Then, just as Jason was counting down the seconds until one of the men would be executed, a grenade landed nearby and blasted. In the commotion, the tango got away. But as Ray (and in turn we) came to surmise, the grenade had come from Jason, hoping that pings off the squirter’s cell phone would lead them to Sankara and Mandy. (This “rogue” play escalated the tension between out-of-the-loop Ray and Jason, who instead included Clay in the decision.) Dryden told Bravo it was time for them to go home, now that Boukare was in custody, but after Jason urged Davis to pull one of her rabbits out of a hat, she alerted everyone to her discovery that one of Sankara’s gold mines was being used by SGS for weapons assembly. As such, Dryden approved Bravo’s storming of same (though he suspected they had a Mandy-related agenda as well).

Arriving at the gold mine, Bravo found… a field of charred corpses, gold-toothed Sankara’s included. There was also one nearby that was the same height and build as Mandy, Jason sighed. As Bravo went ahead with blowing up the facility, Jason and Ray spotted some structures that hadn’t appeared on radar — and some armed tangos. Jason and Ray dodged returned fire and the occasional grenade to storm the structures, fell some enemies and search for Mandy. Each room was empty, though in one of the last ones, Jason got jumped by a tango and a struggle ensued. After knocking away Jason’s pistol, the tango grabbed the knife from Jason’s sheath and tried to stab him with it, eventually driving it into his side. The same knife was then held to Jason’s throat… until someone came up behind the tango and plunged a blade into his throat. Jason pumped a couple rounds into the guy for good measure, then realized that it was Mandy herself who had helped save the day!

(This is where I literally raised my hands above my head in the proverbial BarcaLounger and clapped.) 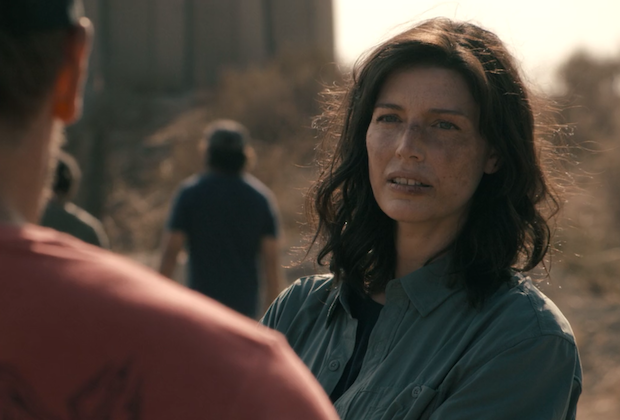 Back at camp, Mandy explained to a most curious Bravo how 10 years ago, while undercover in the region as a French national, she had helped Sankara move guns — and along the way became close with his younger sister, her asset. So when Mandy years later learned that Sankara planned to kill his sister if she didn’t marry a foot soldier and pledge her loyalty to the cause, she had to intervene — if only to “balance the scales” for the assets she had lost. But since this region is now “too hot,” the CIA wouldn’t sanction the reactivation of her cover and had to disavow her. Once captured, Mandy used what she knew of Sankara’s trade routes to barter for her life, by making her more important to Boukare than him.

Before Bravo headed back, Dryden gave Jason props for Bravo’s successes, including how the gold mine/weapons facility destruction had given them a bigger foothold in the region. Clay, Ray, Sonny and Davis then each said goodbye to Mandy, who still had a long CIA debrief ahead of her at the camp. That left Jason, who had yet to say barely a word to the former colleague he bent so many rules to find. Mandy copped to the fact that, as someone noted earlier, yes, she is a professional liar, but “I have never lied to you.” She promised to let Jason know when she is back Stateside and started to walk away, when he interjected, “Hey, I got stabbed for you, so none of this texting bulls–t. I want a phone call.”

What did you think of SEAL Team‘s three-parter?