Dickinson is going out with pens blazing, kicking off its final season with a premiere jam-packed with big life changes.

A narrator begins Friday’s premiere telling us how Emily Dickinson peaked as a poet during the Civil War, cranking out a poem per day, and we see Emily on the battlefield holding a rifle and dodging cannon blasts — but in reality, she’s in her room, using her pen as her weapon. She and her family attend the funeral of her Aunt Lavinia, and Emily’s mother is inconsolable. (It doesn’t help that the reverend is too busy with war funerals to even know who he’s eulogizing.) Even Emily’s friend Death is tired of the war: “Bullet, gangrene, bullet, gangrene… it’s so repetitive.” But when a bird lands on her aunt’s coffin, Emily takes it as a sign. “I want to give people hope,” she excitedly tells Death. “Death can tear people apart. Poetry can put them back together again.” 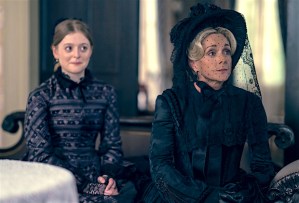 Emily’s mother is still devastated by Aunt Lavinia’s death, and Austin didn’t even bother to show up for the funeral. He’s been staying out all night and drinking too much, Emily’s dad complains. Sue shows up for the reception, though… and she’s very pregnant! Emily takes her upstairs to lie down, which gives them a chance to cuddle. Emily is freaked out that the woman she loves is carrying her brother’s baby, but on the other hand, “pregnancy makes you hotter,” she admits. “It’s kind of messed up.” Sue only loves her and wishes she and Emily could raise this baby together, but to Emily, her poems are her children. She’s been toying around with something about hope being a bird, but it’s not quite there yet.

Austin finally shows up and apologizes for missing the funeral. His mom is instantly forgiving, but his dad pulls him aside for a stern talk. He says he’s “deeply troubled” by Austin’s drinking and womanizing, and reminds him he’s about to become a father. “I don’t even know if that baby’s mine,” Austin fires back. That’s enough to make his dad clutch his chest and fall to the floor, and Emily rushes to help, but he insists he’ll be fine. When Betty stops by, she tells Emily she hasn’t heard from Henry in a month. Emily encourages her to “keep hope alive,” but Betty’s not having it: “I thought poets were supposed to avoid clichés.” 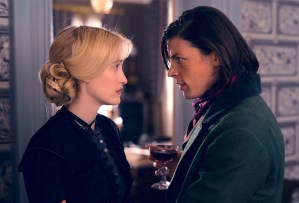 At the reception, Austin openly flirts with Jane the widow, who tells him she can’t see him anymore. (He and Sue barely acknowledge each other.) When Lavinia hears an ex of her died in the war, she lets out an awful scream: “Every boy I’ve ever kissed is dead.” (“You did more than kiss them, honey,” a friend quips.) And when family friend Mr. Conkey arrives, he tells Emily how much he’s always admired her — and gets down on one knee to propose! (Even though she’s “elderly and frail, for a girl.”) She lets him down easy, making up an excuse that she has to take care of her family, and gets out of there, telling Betty that she’s now “a bona fide spinster. Single AF.” We also catch a glimpse of Henry walking through the countryside, looking to go south. “What would you wanna do that for?” an old Black man asks him — and we have the same question, actually.

That night at dinner, Emily’s dad gives a speech about how divided their country is by war, and her mom asks Emily to say something about Aunt Lavinia. Emily says the loss has reminded her how much her family means to her, and she wants to be their light and hope. A drunk Austin scoffs: “That was some bulls–t.” He says the family “is a big pile of lies,” and so is his marriage, and he lashes out at his dad, blaming him for not letting Austin go out west like he wanted. The outburst triggers another episode for Emily’s dad, who grabs his chest again and collapses… but Austin mockingly sings the Star-Spangled Banner and announces: “I’m seceding from this family.” As Emily comes to her father’s aid, a bird flutters into the room and rings some chimes, and Emily’s inspiration kicks in: “Hope is the thing with feathers.” It doesn’t seem to have too many feathers right now, though, does it?

Grab your quill pen and give the Dickinson premiere a grade in our poll, and share your thoughts in the comments.