Lamar is the villain BMF fans love to hate. But when he sang Loose Ends’ 1985 hit “You Can’t Stop the Rain” this week on the Starz drama, the character ignited an unexpected social media parody trend that shocks even the actor who plays him.

Eric Kofi-Abrefa vividly recalls shooting the scene, which aired this past Sunday night (and you can rewatch here), but he is still processing people’s apparent affinity for it.

After all, it was in that moment that Lamar violently and fatally stabbed Slick (Runaways‘ Myles Bullock) after his bestie disagreed with his vengeful plan to hurt the Flenorys. Lamar eerily sang the Loose Ends tune first, then knifed and killed Slick as he attempted to get away from him.

“The song didn’t get stuck in my head when we filmed it, but now it is, because everyone keeps calling me,” an incredulous Kofi-Abrefa tells TVLine. “I pick up the phone to say ‘Hello,’ and people start singing ‘You can’t stop the rain….’ I’m getting voicemails and DMs. And all the Insta and Tik Tok videos in my DMs are all the same. It’s Black men, with do-rags like Lamar’s, singing the song like I did. They even make the same face and do the hand gestures.” 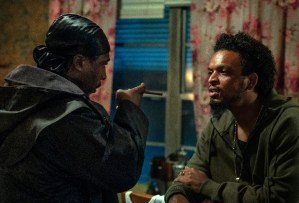 Kofi-Abrefa says that when he first saw the viral video of one of Lamar’s impersonators, it perplexed him.

“I don’t watch the show because the performance is not mine anymore. It’s for others to consume now,” Kofi-Abrefa divulges. “Plus, I don’t want to watch it and say, ‘I should’ve done that or this.’ You know what I mean? So when I saw that guy doing his hands like that, it took me a minute to realize that’s what I did with my fingers, like it was raining. I was like, ‘What is he doing with his hands?’ because I didn’t even know. It’s creepy but flattering. And I feel like if I ask people to stop with the videos and the DMs, they’ll do it even more.”

The serendipitous way the scene came to be is equally fascinating. Kofi-Abrefa would often sing or hum between takes so much so that BMF showrunner Randy Huggins said they needed to work his musicality into the show.

“He obviously picked that scene to have me sing,” says the British actor, who modeled his Detroit accent after that of Huggins, a native of the city. “We went ahead and gave that song a whole new meaning. I can’t say what dark place I went to for that scene; I was just in the moment and in character and it’s just what happened.” 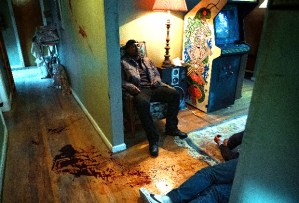 Later in the episode, Lamar made good on his promise to Slick to “bury somebody Meech and Terry care about,” when he attempted to hurt their younger sister Nicole but stabbed and killed her teenage boyfriend Darius instead. Kofi-Abrefa says that part of the installment was especially hard to execute but, as fans will see in Episode 7 (BMF returns Sunday, Nov. 14), Lamar has lost all touch with reality.

“We would do the table reads before we started filming,” Kofi-Abrefa shares, “so I was reading and reading, and then I got to the part where Lamar stabs Darius and I’m like, ‘That’s what we’re doing? We’re doing this now? We’re stabbing kids?’ At the same time, I get it. It’s crazy. It’s nuts, because in Lamar’s mind everybody’s fair game. He’s unhinged.”

The fact that Lamar — an amalgamation loosely based a real Detroit gangster named Layton Simon — no longer has Monique and Zoe in his life only makes things worse.

“He has love for a daughter who’s not really his and he’s trying to have a family because they are a pillar for him,” Kofi-Abrefa observes. “They kept him sane, and now that that’s been taken away by someone he’s already got a problem with, he’s very dangerous. He’s going to hurt whoever he can.”

What did you think of Lamar’s singing on BMF and is “You Can’t Stop the Rain” stuck in your head, too? Drop your thoughts in the comments.