Tom Hanks fondly remembered the late Peter Scolari — and waxed nostalgic about their time together on the early ’80s sitcom Bosom Buddies — during an appearance on Tuesday’s Jimmy Kimmel Live.

Scolari died Oct. 22 following a battle with cancer, but Hanks had not commented publicly before now.

“I don’t know how many people truly do change your lives when you cross paths with them,” he said. “But he and I met, we picked up the scripts and we started screwing around, and I actually thought, ‘Oh, this is it. This is how this works. This is like a hand inside a glove.’ And for two years, at Paramount Studios, on unlucky Stage 25… we were molecularly connected in a way that we started speaking the same language.”

Hanks went on to describe how he and Scolari would screw around on set during 14-hour rehearsal days, improvising new lines and riling up the directors. One unnamed director lost his cool and challenged Hanks and Scolari to come up to the director’s booth and see if they could do a better job — “and Peter was like, ‘I’m on my way,'” Hanks recalled. “Every week was some brand of cuckoo adventure.” 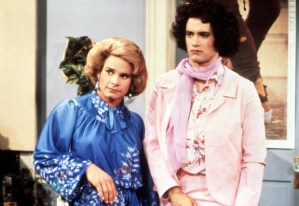 Hanks also shared one of his favorite Bosom Buddies clips — a scene, he said, that showed “the ease and the affection” between him and Scolari, and “just how much fun this was” — from Season 2, Episode 16, “Who’s on Thirst?” In the clip, we see Hanks’ Kip and Scolari’s Henry alone in a cabin in the woods, with very little food to eat. When Kip begins to lose his marbles, Henry has to talk him down.

After the clip was played, Hanks choked up and acknowledged Scolari’s wife Tracy and their “absolutely great” kids. “We lost him to the emperor of all maladies,” Hanks said, “so thanks for letting us show that.”

Watch Hanks’ heartfelt Scolari tribute (which begins at the 10:40 mark) above, then hit the comments with your reactions.