Warning: This story contains spoilers from Queen Sugar Season 6, Episode 8. Proceed at your own risk.

Queen Sugar fans were presented with a lot of unresolved issues on Tuesday’s installment of the beloved OWN drama.

For starters, Charley turned down Davis’ wedding proposal — for now, anyway. She said she wants to pursue her congresswoman dreams and doesn’t think their divorced-lovebirds courtship is strong enough for a long-distance marriage again. Davis said he would wait for Charley, but he was visibly heartbroken. Micah virtue-signaled his bestie Isaiah and hurt his feelings regarding Isaiah’s sexuality, and Dominic told Nova he wants to wait to get intimate.

Amid all of this uncertainty, two people whom viewers have been longing to come back together sat down and hashed things out until there wasn’t a dry eye on either side of the screen. That’s right, Tina Lifford’s Aunt Vi and Kofi Siriboe’s Ralph Angel have healed their relationship wounds and are close once again. And it only took her health scare and his possible jail time to make it so.

“The Bordelons are always under attack,” producer Lisa France, who directed the installment, tells TVLine. “But Episode 8 puts a closer lens on the Bordelons themselves and how much they need one another. It’s a lightening of the load, so to speak.” 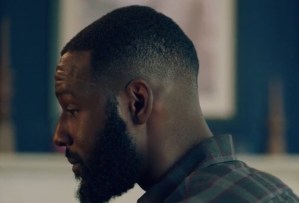 The reconciliation began in Episode 7 when Vi and RA stopped yelling at one another long enough to truly listen. Vi researched the posh boarding school Blue is attending and found out it’s one of the best schools in the country. Ralph Angel, meanwhile, tearfully realized that his misplaced trust in his old prison buddy Theo could cause the family to lose their farm.

Instead of yelling this time, Vi tried a compassionate approach and let Ralph Angel know she admires him as a husband, father and family man who did what he had to do to survive. RA, in return, urged his aunt to take better care of herself because he would be lost without the woman who has become a surrogate mother to him.

Prior to that scene, Hollywood touched base with Ralph Angel and apologized for being too hard on him for committing a crime and putting his freedom and the farm at risk. Ralph Angel said he needed and appreciated Hollywood’s tough love, and they hugged it out. 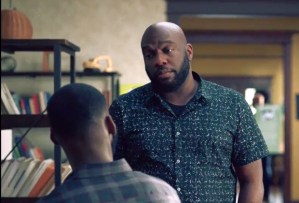 Omar J. Dorsey, who plays Hollywood, says the scene was important not just because his character brought Aunt Vi and Ralph Angel together, but because it showed the importance of communication and forgiveness.

“Hollywood is more like a brother to RA than an uncle, and that matters,” Dorsey explains. “The show is called Queen Sugar, and it’s a very women-driven show. But the relationships between the men on the show are just as important. Hollywood never trusted Theo, he didn’t want Ralph Angel to go back down the path he came from, you know? He was trying to say to him, ‘You’re better than that. We’re over here now.’ And that remains. Hollywood wants to keep uplifting his boy Ralph Angel.”

What did you think of the latest installment of Queen Sugar? Do you think things will be resolved by the Nov. 16 finale? Drop your thoughts in the comments.