This week on NBC’s La Brea, a debate broke out among the survivors, as two rescue options presented themselves. Did either plan pan out before the light closed up?

Picking up where last week left off, Eve explained to a curious Josh how she had just buried a “message in a bottle” for Gavin to hopefully find — because, she explained to her disbelieving son, Gavin’s visions are real, and he in fact has been able to see them. Levi meanwhile was trying to reach someone using the radio he grabbed off the Mojave corpse found inside the fort, when finally a voice crackled through. U.S. Air Force Sergeant Diana Vasquez said that she was looking for her colleague Jonathan (R.I.P.), then told Levi that she and her own plane were in Santa Monica.

Using a Jeep that no one bothered to tell us had been fixed, Levi and Eve drove out to the beach, where they found an understandably skittish Diana. Levi produced the photo of the Mojave crew to prove he’s a friendly, after which Diana explained that she and her crew years ago flew through a storm after passing through the Mojave portal, and wound up in L.A. Learning of the exact damage to Levi’s plane, she believed parts from hers can get his flying again.

Meanwhile topside… Gavin upon reading Eve’s letter was rarin’ to fly down into the sinkhole, but Agent Markman showed up to squelch that idea. They all then got summoned to an area of the dig site, where the wreckage of Levi’s plane suddenly materialized on underground radar… along with corpses. This made Gavin more determined to fly on down, but Markman had him, Izzy and Dr. Aldridge hauled away. Dr. Nathan, though, resurfaced to visit them in their holding room, saying that she had led Markman’s team on a small, wild goose chase (to Aldridge’s property in Oregon). With that time bought, Nathan sneaked them out, as well as arranged for Gavin to get word to the survivors about Levi’s doomed flight.

The survivors had just navigated a prickly picking of names out of a hat, to decide who makes it onto Levi’s first flight out, when they saw that messenger drone tumble through the light. Racing to recover it, they found inside a video recording of Gavin, who explained that Levi’s plane was doomed, while he himself would soon be on the way in a new plane. This news split the group of survivors in two, with some refusing to believe that wreckage found in 2021 meant that Levi would absolutely crash, and the other side willing to wait for Gavin to come.

Eve took notice of Marybeth’s silence during the squabble, and accurately took it to mean that Lucas’ mom was on her side, and was willing to wait. Looking to press their agenda, they commandeered the working Jeep and drove out to see Levi and Diana, who had just solved a possible complication with the plane. A standoff ensued, with Marybeth eventually drawing her gun. That triggered Diana, who is desperate to reunite with her fiancee Dr. Nathan, to pull out her own. Diana shot at and missed Marybeth, but sparked an explosion with one of the plane’s engine thingies. Marybeth returned fire, delivering what proved to be a fatal wound to Diana’s belly. 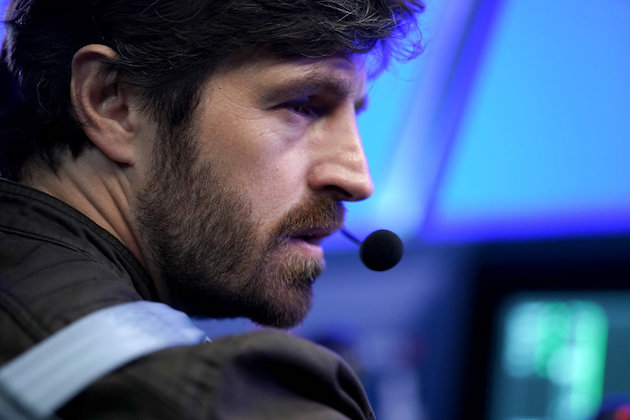 Meanwhile back up top… Izzy and Dr. Nathan stalled the feds arriving at Aldridge’s ranch long enough for Gavin and Aldridge to take off in the plane. But as they closed in on the La Brea sinkhole, Markman radioed to warn that he had F-15s ready to shoot them down. Gavin was willing to go for it, but Aldridge got cold feet and decided to parachute out — but not before cryptically telling Gavin that there is a reason he has his visions, and that an alternate path to saving Eve & Co. lies in him “going back to the beginning,” to “November 16, 1988.” After she jumped, Gavin informed Markman (and a panicking Izzy) that he would turn around and land.

Elsewhere this week: Ty learned that not only are Veronica and Lily not sisters, but that Aaron wasn’t anyone’s father — he had kidnapped them both. Ty searched for and found Veronica, at Aaron’s gravesite, only to get bludgeoned by her for his troubles.

Also, believing he’d be on Levi’s first flight out, Lucas tasked Scott with digging up the heroin, but they instead found a lockbox containing bars and bars of Civil War gold — which, of course, wouldn’t belong in Los Angeles circa 10,000 B.C.!