As it loves to do, The Voice threw us a curveball Monday, revealing in its final moments that coaches Blake Shelton, John Legend, Kelly Clarkson and Ariana Grande had each been allowed to nominate an artist who’d been eliminated during the Battles or Knockouts to make a comeback during the live shows. Which one of them would get to return? That, as you might have suspected, would be up to viewers. (To vote, tweet #VoiceComeback and your chosen artist’s first name.)

Ariana gave a second chance to Vaughn Mugol, who I think we all agreed had been done in by his coach’s Battles song selection for him, Blake called back into action Hailey Green, Kelly chose Aaron Hines, and John picked Samara Brown. Oh, spoiler alert: Samara lost her Knockout Monday evening. And if you read on, we’ll discuss how that happened, who else was cut and those two showstopping performances.

Team Legend: Shadale performing “Impossible” (Grade: A+) defeated Samara Brown performing “The Best” (Grade: B) | After rehearsing in front of their coach and Mega Mentor Ed Sheeran, Samara was advised to attack her high notes with more confidence, and Shadale, instructed to maybe slow down a bit, thereby giving more power to the lyrics. On stage, and I know I’ll get flak for saying this, although Samara was for the most part formidable — charismatic and vocally powerful enough not to be drowned out by the band — she simply wasn’t able to nail all of the notes that she went for. Great singer to be sure, but she set a challenge for herself that she didn’t meet 100 percent; more like maybe 90-95. Following her into the spotlight, Shadale delivered a performance that swung for the rafters and actually hit them. When she went big, she got there. When she went emotional, she took me there. When she went raspy, she scratched my eardrums. As Blake put it, in like two minutes, she went from great to exceptional. Easy peasy, the clear winner of the KO.

Team Blake: Lana Scott performing “Wildest Dreams” (Grade: B+) defeated Carson Peters performing “Amarillo by Morning” (Grade: C) | Once the duo had tried out their numbers for Blake and Ed, Carson, who incorporated his fiddling into his performance, was advised not to attempt to out-George Strait George Strait, and Lana was given tips on managing her soft notes vs. the belty ones. Up first behind the mic, Lana delivered a lovely — and appealingly squeaky — Taylor Swift cover. Though she sounded like she was straining on her long notes in rehearsal, here she pulled them off. Solid. Next up, Carson mounted a full-on charm offensive, but alas, we could hear the nerves in his voice. This was not the kind of performance that earned him a four-chair turn in the Blinds. I suspect he would’ve made it further in the contest in the long run than Lana — country + cute kid with a gimmick — but here, he was definitely out-sung. 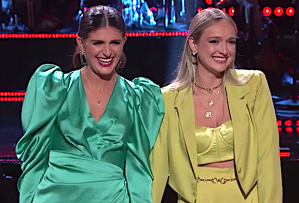 Team Ariana: Bella DeNapoli performing “Chandelier” (Grade: B) defeated Katherine Ann Mohler performing “Poison” (Grade: C) | Pre-show, Bella wowed Ari and Ed with her rearrangement of Sia’s hit. Not to be outdone, Katherine stunned her advisors with her Halloween-y take on Bell Biv DeVoe — but had an “energy imbalance,” her coach noted, in the hook. In the moment of truth, Bella started off strong, her stripped-down, intimate take on “Chandelier” a fine springboard for an impassioned chorus. But was it just me, or did it sound on the big notes like she was barely hanging on? It seems like a problem if I’m more impressed by her storyteller-like verses than her raise-the-roof choruses. Second in the spotlight, Katherine was utterly haunting — at first. Then she wound up doing herself in with “Poison.” Her creativity is laudable, for sure — as is Bella’s — but her reinterpretation of the R&B classic didn’t really hold together and left her sounding kinda pitchy and unpleasant on the chorus. Wanted to love it; did not. 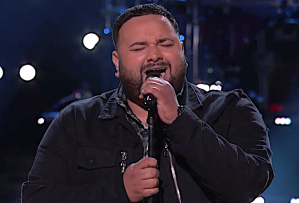 Team Kelly: Jeremy Rosado performing “Run to You” (Grade: A-) defeated Xavier Cornell performing “Falling Slowly” (Grade: B-) | Oo, when Jeremy revealed that he was covering Whitney Houston, I was psyched — that seemed perfect for him. Hey, even Ed said it was “a genius stroke.” The only advice Jeremy’s advisors really had for him was stay on the mic. After Xavier ran through his Once cover, he was told to slow it down — let a sexy line be sexy. Come showtime, Jeremy turned out an extremely well-modulated rendition of his big ballad; he built and built to, if not Whitney’s level of magnitude, at least, say, in the vicinity of Michael Bolton’s. Plus, you could almost hear the curlicues on which he ended his runs. Given the unenviable task of following Jeremy, Xavier often sounded like he was trying too hard, almost like he was trying to make the song larger and louder to compete with Jeremy. But then Xander really nailed those last big notes, making it impossible to completely dismiss him.

Team Blake: Peedy Chavis performing “Unchain My Heart” (Grade: B) defeated Berritt Haynes performing “I Swear” (Grade: C-) | Though these two were only shown in a heavily abbreviated KO, we heard enough to know that poor Berritt had run afoul of some major pitch issues. Peedy, on the other hand, not only delivered a vocal that was full of exclamation points, he put on a damn show. And while yes, yes, this is a singing competition, it’s never a bad thing to keep your audience entertained, right? 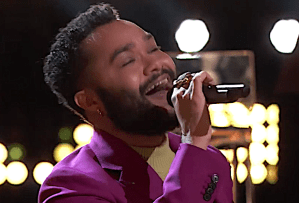 Team Ariana: Jim and Sasha Allen performing “Home” (Grade: A-) defeated Manny Keith performing “Golden” (Grade: C+) | Following a run-through with Ari and Ed, Manny was clocked for holding back, whereas Sasha was reminded to look at the audience now and then. On stage, he did just that as his dad accompanied him on harmonica and… was that a mandolin? At any rate, their performance was delightful, their harmonies tight even as it felt like they were just spontaneously occurring. Was it a revelation? Something that we hadn’t seen or heard before? No and no. They just sounded swell and left my heart feeling a little lighter. If that isn’t worth an A-, what is? Singing second, Manny began his performance strangely muted. I guess that gave him someplace to go with it? But as energetic as he was, the whole thing fell sorta flat. He smiled, he danced (to the point that it affected his vocal), and it amounted to less than the sum of its parts. Poor song choice, methinks. 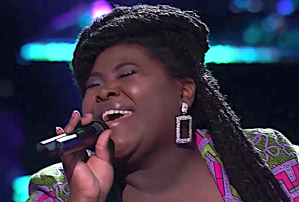 Team Legend: Jershika Maple performing “Inseparable” (Grade: A+) defeated Paris Winningham performing “Tennessee Whiskey” (Grade: A) — Paris stolen by Blake | In rehearsal, Jershika was so amazing that she made her coach all the happier that he’d stolen her from Kelly; Ed had no notes whatsoever, he was so bowled over. Following Paris’ run-through of his Chris Stapleton cover, Ed suggested stripping away some of the instrumentation to allow the contestant’s voice to really shine. (Of note: Oh, it did shine!) At go time, Jershika gave off spectacular old-school soul vibes and revealed a range that was so great, I was like damn! They needed two stages for that [bleep]! She gave me chills and then gave my chills chills! While the mic was still cooling off after that, Paris picked it up and reeled us right the hell in with a performance that was so authentic and raw — and beautiful — it would not be denied. I didn’t blame him a bit for taking off his glasses mid-song; they had to be getting steamy, as much undiluted emotion as he poured into his vocal.

So, who will be getting your vote for a comeback? And which act got the biggest reaction out of you Monday night? Vote in the polls below, then enough already with what I thought — hit the comments with your reviews.