I didn’t want to use a phrase this obvious in my recap of Monday’s Dancing With the Stars, but my willpower is nonexistent: It was Queen Night in the ABC ballroom… but which couple’s Season 30 run bit the dust? (I don’t like it, but I had no choice.)

With only nine couples left in the competition, Dancing honored the music of Freddie Mercury & Co. in Week 7, with every single male pro rocking a Mercury mustache, too. Hey, it is Movember, and I respect the commitment.

Plus, in addition to the episode’s regular duo dances, Monday’s installment featured three relay dances that left coveted bonus points up for grabs. Let’s break down the eventful broadcast:

Amanda Kloots and pro Alan Bersten (Jive to “Don’t Stop Me Now”): Amanda is perhaps the best technical dancer left in the competition — other than maybe JoJo, I don’t think anyone else could have handled even half of that jive choreography with such precision and energy — but it does seem she’s hitting a ceiling here, and it’s hard to understand why. Alan is packing her routines with legitimate content every week, and she’s dancing it well, but there is an oddly joyless vibe about the whole thing, and I fear she’s running out of opportunities for a true breakthrough. Judges’ Score: 33/40 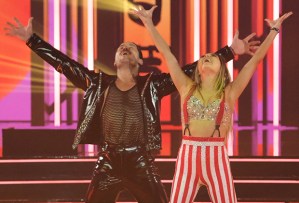 Olivia Jade and pro Val Chmerkovskiy (Quickstep to “Fat Bottomed Girls,” pictured): Olivia’s connection with the home audience seems to fluctuate every week, but there’s an infectious energy radiating through all of her performances, including this quickstep. In a style that can often look a bit hokey and uncomfortable, Olivia looked completely at ease. Judges’ Score: 38/40

Iman Shumpert and pro Daniella Karagach (Paso Doble to “Another One Bites the Dust”): Iman’s growth has been truly impressive, and the swagger goes on for days, even when he’s dancing apart from Daniella and gets a bit lost at sea. For the paso doble, though, most of Iman’s movements — including those hand flourishes — could have used about 50 percent more power behind them; Bruno, at least, brought that to his attention, while Carrie Ann Inaba barely acknowledged it after waxing poetic about Iman’s game-changing participation on this show. He can use the constructive criticism, folks! Give it to him! Judges’ Score: 32/40

Jimmie Allen and pro Emma Slater (Viennese Waltz to “Somebody to Love”): Another item for the Confusing Judge Feedback file: Derek Hough pointing out that Viennese waltzes are often smooth and elegant, and this routine wasn’t those things, then giving them… a 10? Baffling! That said, Jimmie wasn’t afraid to really elongate his movements throughout this number, giving us gorgeous, clean lines. As for the lip-syncing, you already know how I feel about it. Judges’ Score: 38/40

The Miz and pro Witney Carson (Foxtrot to “Radio Ga Ga”): On the whole, The Miz was much more graceful here than I thought he’d be, with a very smooth execution in hold. That side-by-side section near the judges’ table was a bit messier, though, and his tilted head looked practically frozen in a position that was comically high. Judges’ Score: 32/40

JoJo Siwa and pro Jenna Johnson (Tango to “Body Language”): I was actually expecting more criticism of the tango content here, since JoJo and Jenna’s number often looked more like a jazz routine in places. But JoJo proved again just how much of a chameleon she is, attacking this choreography with high energy and a sizzling chemistry with Jenna. Judges’ Score: 39/40

Suni Lee and pro Sasha Farber (Paso Doble to “We Will Rock You”): Up until the very end of Suni and Sasha’s paso doble, I was preparing to write about Suni’s unfortunate hesitance and the internal monologue that seemed to be plaguing her throughout the number — but it turns out stomach troubles actually were plaguing her, and Suni seemed in her head because she was trying to keep from vomiting (which she ran off the floor to do the moment the dance was over, poor thing). All told, it’s hard to assess this particular performance, but I do think Suni’s upper-body movements, much like Iman’s, could have been more pronounced. Judges’ Score: 33/40 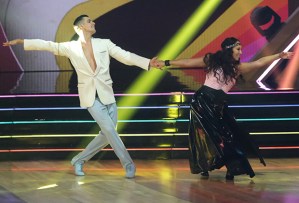 Cody Rigsby and pro Cheryl Burke (Foxtrot to “You’re My Best Friend,” pictured): Cody did seem to relax into this choreography more than he’s done with other traditional styles, and his facial expressions were much more open and natural. Before the competition wraps up, though — and that’s in just a few short weeks! — I’d love for him to get a Viennese waltz or contemporary, or a similar style that lets him truly emote and showcase some vulnerability. Judges’ Score: 34/40

Melora Hardin and pro Artem Chigvintsev (Foxtrot to “Killer Queen”): No sooner had I typed, “Melora never seems to miss a beat” than the Bold Type actress missed several, unfortunately, bringing her foxtrot to a wobbly end. (Again, not sure what’s in the water for the judges this week, but across the entire dais, only Carrie Ann mentioned the sizable snafu? And cut Melora off when she tried to explain what had happened? I’m puzzled.) Before that mistake, though, Melora did a lovely job, and she wisely reined in her acting just a tad. Judges’ Score: 36/40

Next up were the relay dances, in which three different couples would perform during the duration of one Queen song, passing the dance floor off to the next couple after their section was complete. At the end of each relay, each of the four judges awarded one bonus point to one of the three couples that just performed. Those shook out like this:

OK, your turn! Which Queen Night performance(s) impressed you the most? Cast your vote in our poll below, then drop a comment to elaborate on your choice!