In the finale for Netflix’s limited series Colin in Black and White, Colin Kaepernick unpacks his birth story and reveals that his adoptive parents wanted a white baby but settled for him.

“Since the day I was born,” Kaepernick intoned. “I’ve never been anybody’s first choice.”

Despite this sobering statement, the sixth and final installment of the young-adult drama was full of uplifting and positive moments. Key among them was the message that the high school senior never gave up on his dream of becoming a Division I quarterback, even though the odds were against him.

He received rejection letters from Stanford and even got a “it’s not you, it’s us” call from his backup school, the University of Wisconsin (his birth state). The rejection started to wear on poor Colin, and his friends Eddie and Jake had to cheer him up with tacos and jokes. Colin was also a strong basketball and baseball player, and his baseball coach kept yelling at him to give up his football dreams and focus on getting a baseball scholarship instead.

But Colin had dreams of becoming a quarterback, and when his baseball coach realized he wasn’t going to change his mind, he urged him to send out DVDs of his games to college coaches. Colin and his dad did just that, and he received more rejection letters. He also attended two dozen camps, combines and showcases, and his dad Rick kept up his spirits with wonderfully corny cheese jokes because his dad worked at a cheese factory. 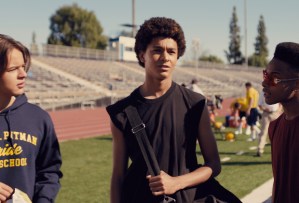 Thankfully for Colin, one of those camps was at the University of Nevada, Reno, and when the coach needed a freshman quarterback, he thought of Colin and offered him the opportunity. One of the coach’s recruiters had seen Colin playing basketball and remembered his name. Colin accepted the offer and learned a valuable lesson to trust his instincts and his power. As time went on, Kaepernick said, he also learned to love his Blackness.

What did you think of the finale of Colin in Black and White and the limited series as a whole? Grade the series in our poll, and drop your thoughts in the comments.