Oh, The Witcher‘s Geralt of Rivia has seen some things — so, as indicated in the new trailer for Season 2, you’ll have to forgive him if your “end of days” blathering doesn’t make him quake in his boots.

In addition to the new trailer above, Netflix also released the poster below (click to zoom). 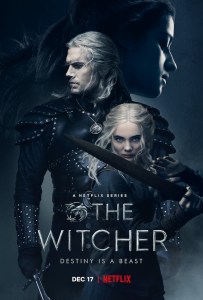 Based on the novels by Andrzej Sapkowski, Netflix’s The Witcher stars Man of Steel‘s Henry Cavill as Geralt, a solitary monster hunter struggling to find his place in the world when destiny unites him, a powerful sorceress and a young princess as they navigate the increasingly volatile Continent together.

The official synopsis for Season 2 tells us this: Convinced that Yennefer’s (Anya Chalotra) life was lost at the Battle of Sodden, Geralt brings Princess Cirilla (Freya Allan) to the safest place he knows — his childhood home of Kaer Morhen. While the Continent’s kings, elves, humans and demons strive for supremacy outside its walls, he must protect the girl from something far more dangerous: the mysterious power she possesses inside.

The Witcher Season 2 will premiere Friday, Dec. 17 — almost exactly two years since Season 1 was released. Netflix previously unveiled titles for seven of the eight upcoming installments: “A Grain of Truth,” “Kaer Morhen,” “What Is Lost,” “Redanian Intelligence,” “Turn Your Back,” “Dear Friend” and “Voleth Meir.” (The finale’s title, meanwhile, remains a secret?)

Want scoop on The Witcher, or for any other show? Email InsideLine@tvline.com and your question may be answered via Matt’s Inside Line.