The Staten Island vampires mourned a huge loss in the Season 3 finale of What We Do in the Shadows… but it led to a number of new beginnings.

The vamps are all sad following the demise of their roommate Colin Robinson last week. (“Vampires are no strangers to death. They deal with it every day with the people that they kill,” Guillermo says, but this is different.) They sit for a family portrait, as is tradition after a vampire death, joined by The Guide, Baron Afanas and The Sire — and painted by Donal Logue! (“I took up painting during Season 2 of Grounded for Life,” he explains.) And if there was any doubt Colin is really gone, actor Mark Proksch’s face is even erased from the opening credits! 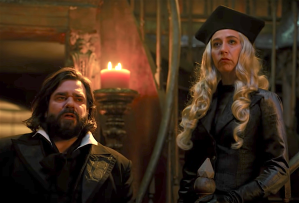 The tragedy has spurred the other vampires to make some big decisions: Nandor announces he’s leaving Staten Island to travel the world — and he’s not taking Guillermo with him. (“It’s gonna be a real Eat, Pray, Love journey for me,” Nandor says. Oh sorry, he means “Eat, Prey, Love.”) Nadja, meanwhile, has been invited to move to London and join the Supreme Vampiric Council, but Laszlo has vowed never to return to Great Britain. (“United Kingdom? United Ding-dong, more like.”) It seems he was expelled from the UK’s prestigious Sherwood Club for… unknown reasons, and he’s still holding a grudge.

After some prodding, Laszlo reveals they kicked him out because he fell in love with a “peasant girl,” aka Nadja. (Awww!) But now she’ll be on the Supreme Vampiric Council and living the high life, so she won’t be a peasant anymore. Problem solved! So he’ll join her in jolly old England after all. Guillermo, sensing that everyone is leaving, starts to panic and angrily reminds Nandor that he’s a vampire slayer: “The only reason you’re alive is because I let you live.” That sets off a fierce wrestling match between vampire and familiar, with Guillermo finally getting the upper hand by stunning Nandor with a crucifix. He’s won Nandor’s respect, and the vamp offers to take Guillermo along on his world tour — and finally make him a vampire, too. Guillermo happily accepts, of course! 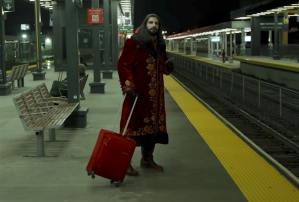 As Nandor heads to the train station, roller suitcase in hand, Guillermo helps Laszlo and Nadja get ready for their boat trip to England — but first, Laszlo takes a trip down to the basement, where he’s “taking care of some business.” Hmmm. At the docks, Guillermo seals Nadja into her travel coffin, but when he turns to help Laszlo, the cheeky vamp shoves him into the coffin and seals him up, sending him off with Nadja. He explains in a letter: Nadja can take care of himself, but others are “weak and defenseless” and “need protection and care.” And we see that when he went down to the basement, he said some final words over Colin’s dead body — and then discovered Colin’s torso had burst open, with a trail of blood leading away from it. He followed it and found… a crying baby with Colin Robinson’s face! Our favorite energy vampire is reborn!

Alright, creatures of the night: Give the Shadows finale a grade in our poll, and then venture down into the comments to share your thoughts.