Who better to select the next Queen of the Universe than a few of RuPaul’s nearest and dearest?

Vanessa Williams, Leona Lewis, Trixie Mattel and Michelle Visage have been selected to judge the new Paramount+ singing competition series, which will “follow the world’s most talented drag queens as they battle it out for global domination, and countries go head to head spotlighting their top talent.” Graham Norton will serve as host.

In addition to guest-judging both Drag Race and All Stars, Williams also won her episode of RuPaul’s Secret Celebrity Drag Race; Mattel placed sixth on Drag Race Season 7, then returned to win All Stars Season 3; Visage has been Ru’s right-hand woman since Drag Race Season 3; and Norton has judged all three seasons of RuPaul’s Drag Race UK. In other words, most of them go way back. 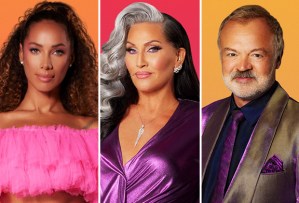 According to the official release, “each episode will feature the world’s fiercest queens as they debut a new musical performance in front of a live audience and the ‘Pop Diva Panel’ of judges in the hopes of being crowned the Queen of the Universe.”

Contestants have yet to be announced, but we know that they will represent 10 different countries: USA, Mexico, Brazil, Denmark, Australia, Canada, England, France, China and India.

Produced by MTV Entertainment Studios and World of Wonder, Queen of the Universe premieres Thursday, Dec. 2 on Paramount+, with new episodes hitting the streaming service each week. Will you be tuning in? Drop a comment with your thoughts below.