Peacock is hoping to get viewers in the holiday spirit with festive and feisty programming that includes the original movie The Housewives of the North Pole and the competition series Baking It.

Starring Breaking Bad‘s Betsy Brandt and The Real Housewives of Beverly Hills icon Kyle Richards, The Housewives of the North Pole will premiere Thursday, Dec. 9 on the streaming network and is Peacock’s first homegrown holiday movie.

The flick follows Christmas Queens Trish (Richards) and Diana (Brandt), who have won the Best Holiday House decorating competition in their neck of the woods for the past nine years. A few days before Christmas, however, their friendship-ending argument sets off a town-wide feud and draws the attention of the national media. 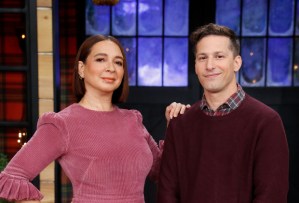 The less histrionic Baking It, meanwhile, will be hosted by Saturday Night Live alums Maya Rudolph and Andy Samberg and debuts Thursday, Dec. 2 with all six episodes.

From the creators of the NBC crafting competition Making It and executive-produced by Amy Poehler, the holiday competition series features eight pairs of home bakers who will join Rudolph and Samberg at their “winter cabin for a celebration of culinary holiday traditions,” per the official logline.

The baking teams will compete in themed challenges for a shot at a cash prize and to have their baked creations judged by a panel of opinionated grandmothers and veteran bakers.