With a record deal under their belt, Wu-Tang: An American Saga’s Season 2 finale focused on celebrating Wu-Tang’s arrival as a formidable force in music.

The hour, aptly titled “As High as Wu-Tang Get,” opened on the set of the Clan’s music video for “Protect Ya Neck.” Those scenes, which were mostly shown in black-and-white, felt intimate and authentic — as though we’d stepped back in time — as the iconic video (their first ever) came together.

Bobby’s creative mind went right to work, turning a nearby jumping into a centerpiece for their video and even thinking to behead a dummy to make the most of what little footage they had left to shoot. 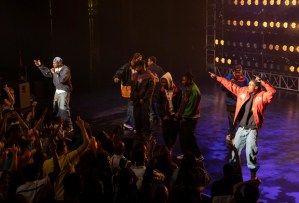 In between filming, Ason (Ol’ Dirty Bastard) and Bobby (RZA) reminisced about their school days, Sha (Raekwon) thought about how he went from sleeping on the roof at his lowest point to now filming a music video right in front of that same building, Gary (GZA) worried about finances since his credit cards were used to fund the video, and the group raided wardrobe for free swag.

Bobby learned that Def Jam had offered $175,000 to sign Method Man solo, while both Def Jam and Elektra were offering $150,000 for Ason. However, Elektra also agreed to give Ason ownership of his music after 20 years, which Bobby thought was the better deal. He agreed to have Ason sign with Elektra (despite Ason’s childhood dream to go with Def Jam) without consulting him. That led a public fight on the subway between the pair, with Ason upset that he wasn’t even given a choice in the matter.

Meanwhile, Steve secured the group a spot opening for Run-DMC at the Jack the Rapper festival. Unfortunately, they were cut from the lineup when the show ran over. But rather than accept defeat, the Clan accosted the DJ and took the stage to perform anyway. The bold move worked, and soon, they were everywhere. Their music was all over the radio, album sales went up, and it seemed like all that hard work had finally paid off. 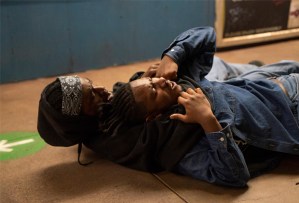 Footage of Bobby labeling each floppy disk served as a clever transition to updates on each member: Sha expressed his excitement over the group on the verge of blowing up, U-GOD was arrested for violating his probation after traveling to Atlanta without permission, Gary received props on the street for putting New York on the map, Method Man signed with Def Jam and Rebel (Inspectah Deck) admired some Wu-Tang graffiti.

Plus, Power was excited that Wu Wear (the Clan’s official clothing line which his father coined) sold out and made plans for larger merch orders, Divine learned he was expecting a baby with Nia, Ason got hype at a bar and assaulted the bartender for not serving him quickly enough, and Dennis’ (Ghostface Killah) brother Darren showed no signs improvement after being put on new medication.

The episode wrapped on a potentially new low for the group: A pipe burst in Bobby’s basement and flooded the whole area, seemingly destroying the five completed debut solo albums.

What did you think of the Season 2 ender? Grade the finale below, and let us know your thoughts in the comments.