Survivor has officially become the Xzibit meme of reality TV. (Yo dawg, we heard you like twists…)

Yes, the tribes are now merged (sort of), and in the annals of Survivors past, everyone typically eats, drinks delicious island rum and is merry! Not anymore.

Season 41 continued turning the madness up to 11, and for the first time ever, the merge was split into halves, with one player heading straight to Exile Island before she met the remainder of the cast! People even sat out of a challenge that was sort of an immunity, but kind of a reward, but also neither of those things. (At this point, we may need to petition CBS to publish an official Survivor rulebook so we can keep all of this ABSOLUTE ANARCHY straight. Does anyone else rewind a gazillion times to review Jeff’s latest quandaries and if-then statements? Praise be for DVR and streaming, I tell ya.)

We begin with a spat between Shan and Ricard, and even though I wish we can just get to the dang merge already, I’ll say this: Shan should’ve cut Ricard last week. Will that decision come back to bite her once the tribes become one? We’ll see. He does give her the extra vote advantage back though.

Over at Yase, Tree Mail delivers the milestone merge message, and despite Xander telling us they’re locked in as a foursome, Liana is “chomping at the bit” to flip the narrative on him. Luvu, meanwhile, is “shattered,” according to Deshawn, but he still wants the blue team to vote together, at least for the first tribal.

A FEAST IS NOW UP FOR GRABS | Jeff tells us that the “biggest twist so far” looms, and when he brings the tribes in, he tells them to drop their buffs. Buuut they aren’t exactly merged. Here’s what goes down:

A challenge is run with two separate teams. The winners earn a large feast, plus they get their merge buff. And they will not have to compete in the immunity challenge. They’re already safe. The losing team: no meal, no buff and they’ll have to compete again later for safety. Plus, the two players who draw gray rocks will not compete in this challenge. Their fate will be decided by the winning team.

The competition includes unearthing a large boulder and pushing it through an obstacle course and — you guessed it! — completing a word puzzle at the end. So who’s gettin’ those tasty noms? Ricard, Danny, Sydney, Deshawn and Evvie are filling their empty bellies. But before they head out, they must choose either Naseer or Erica to join them (aka the two who sat out). The other person will be taken to a separate island where he or she will live alone for two days and two nights. They choose Naseer to eat, and Erica to skedaddle.

EXILE ISLAND | Erica is given a pot with water and a meager amount of rice. She tells us she’s the person least equipped to be outside, but she’s able to make her own fire, so, respect. She regales us with a story of how her immigrant family’s hard work ethic gave her the tools she needed to get through life. Thus, she’ll get through this, too. 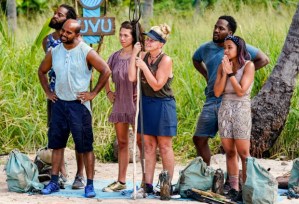 BACK AT CAMP | Shan makes a big snafu by asking Liana about her advantage in front of Tiffany. (Knowledge really is power, and Shan should’ve known better than to start blabbing in front of others.) Plus, Liana still wanting to target Xander rubs Tiffany the wrong way. Seems like there’s a crack in the Yase four after all, but will anyone else sniff it out and capitalize on it?

With Erica away, Danny continues plotting her demise, but everyone else is scared she might return from Exile with an advantage in her pocket. Getting that gal gone might just be easier said than done.

Shan and Liana extend their bond to Danny and Deshawn, showing that there’s a real possibility for an all-Black alliance to form. Could this be the beginning of a Cookout 2.0 on Survivor? (Worth noting, this season filmed in April and May of this year, well before houseguests moved into the Big Brother 23 house.)

EXILE | Jeff pays Erica a visit, and here’s where things get really crazy. He asks her about the emotional toll her exile has taken, and she says she feels like she has so much catching up to do once she gets back. (It is a critical time in the game, after all.)

Jeff then drops a bombshell. He presents her with an hourglass, and this special little item can be used to rewind the events of Survivor history. If she smashes the hourglass with a hammer before returning to camp, she can change the results of that last challenge. Everyone who won the challenge and enjoyed the merge feast (Ricard, Danny, Sydney, Deshawn, Evvie and Naseer) will lose their safety and can be voted out at the next tribal. That immunity will then be transferred to the other half of the players: Shan, Tiffany, Liana, Xander, Heather and Erica.

Did she opt to turn back time, and who became the first post-merge vote-out? We’ll have to wait until next week to find out.

Is there any chance in hell Erica won’t smash the hourglass? Let us know your thoughts in the Comments!