Like many of the roles Tracy Morgan plays, his The Last O.G. character Tray is basically an alternate version of him. Perhaps that’s why seeing Tray in a coma at the top of the TBS comedy’s Season 4 premiere on Tuesday felt so jarring and surreal.

Seven years ago, the Saturday Night Live vet was in a coma for two weeks following a horrific vehicular accident on the New Jersey Turnpike that killed one of his friends. Tray, in contrast, fell into a coma after someone beat, shot and left him for dead at the end of Season 3.

Believe it or not, this is a comedy, and thankfully, humor took the lead on The Last O.G. and showed a comatose Tray comically bopping around a heavenly rendition of his Brooklyn neighborhood. It was a place where Karens called the police to say how fantastic Tray and his kids were, LeBron James bought the New York Knicks, and the police gave away free candy and treats.

Tray’s teenage children and mother sat by his hospital bedside in the meantime and cried and prayed over him. And just as in real life, Tray woke up from his coma and told jokes about his mother needing to pray less because God was finding it hard to sleep. Things got harder for Tray after he came to and he had to learn how to walk again. Luckily for Tray, he had a dedicated Caribbean physical therapy nurse who bribed him with Jamaican beef patties and got him back on his feet. 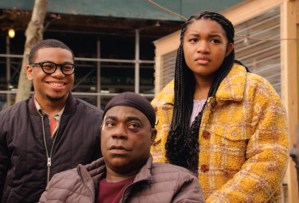 He relapsed psychologically after leaving the hospital and found it hard to walk and make love to his girlfriend Jasmine. But his daughter Amira, son Shahzad and mother Roberta never gave up, and even Josh, his kid’s stepfather, encouraged him to keep trying.

By the time he attended church with his mother, Tray was walking with occasional assistance from Amira. Now that his ex-girlfriend/mother of his children Shay was away traveling for work (because Tiffany Haddish left the show), Tray also found a new nemesis in Veesy, an outspoken, anti-gentrification wisenheimer from his childhood (played by the hilarious Da’Vine Joy Randolph).

In Episode 2, which also aired on Tuesday, Tray received more good karma. A young man named Andre from his prison days asked his gangster uncle to intervene and stop Divine and his henchmen from further hurting Tray because of what Cousin Bobby did. The good-faith gesture not only revealed that Divine shot Tray but proved that, through it all, The Last O.G. is a hard man to keep down.

What did think of the Season 4 premiere of The Last O.G.? Grade the two-part premiere in our poll, and drop your thoughts in the comments.