Love was in the air for this week’s Supergirl, which was aptly titled “I Believe in a Thing Called Love.”

Lex Luthor, who is far from a romantic hero, made his best efforts to woo Nxyly after falling in love with her in the future. He returned to inform her that she dies, and he can help her avoid that fate if they work together. However, the fifth-dimensional imp was not fond of men who send women to the Phantom Zone, and she promptly shut him down.

As Lex struggled with breaking through to the future love of his life, Alex prepared to propose to Kelly on the anniversary of the day she realized Kelly was the love of her life. Determined to prepare a perfect evening, she soon learned that the venue she had in mind was already booked.  Big problem. 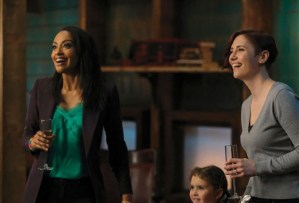 With Supergirl focused on stopping Nyxly, the Super Friends mapped out a plan to defeat her by using a decoy totem with help from Lena, who would use her magic to disguise it. Their plan nearly worked, and Lex showed up and helped Nyxly escape. Nyxly was still not impressed, though, and tried to kick Lex out of his own house before leaving herself.

Elsewhere, Kara pulled Lena aside for a much-needed talk after noticing Lena burned the decoy once Lex appeared. Lena revealed that her rage took over in that moment and that she was afraid she would end up like her mother, who also lost control of her powers and hurt people. Over at CatCo, Will approached Andrea about Lex and Nyxly’s unlikely team-up, insisting they need more proof that he was really back. Andrea gave him a deadline: find that evidence tonight, or she’d run the story regardless.

Dreamer tracked down the love totem to a church and engaged in another battle with Nyxly. The dream totem gave Supergirl a nightmare about the Phantoms, just in time for the love totem to disappear. It’s drawn to love, but repelled by hate.

After her second unsuccessful attempt to recover the love totem, Nyxly finally agreed to work with Lex. However, she made it clear that they will never be friends. “It’s strictly business,” she told him.

If the Super Friends wanted to defeat Nyxly, they needed to use all their firepower. That meant using their totem as a weapon, which also came with the risk of losing their humanity. Supergirl developed a workaround which entailed Lena using her powers to protect the Girl of Steel from the totem’s adverse effects. Lena, worried that she would lose control, expressed her fear of hurting Kara. Ever the optimist, Kara encouraged Lena to focus on the good and use that to power her magic. Do that, and she won’t lose control. 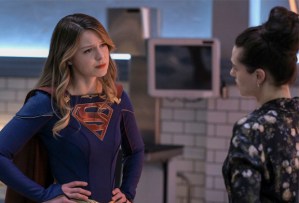 Alex returned to the bar she had hoped would be the setting for her proposal, only to learn that Kelly had already booked it. They both had the same idea. Kelly started to propose, but Alex interrupted her, intending to propose herself. But when Alex reached for her ring, she found the love totem.

Nyxly also traced its whereabouts, and another battle ensued. The Super Friends were again on the verge of defeating Nyxly until Lex interfered. Our heroes were baffled, though, because Lex ditched the love totem and instead helped Nyxly. Nyxly, too, was confused until Lex finally came clean about falling in love with her in the future. Although he didn’t win her over romantically, he did earn her allegiance. (“I don’t see why we can’t be friends.”)

Alex’s second attempt at proposing to Kelly was a much more joyous affair. She did it it front of their friends, and Kelly, of course, accepted. But while everyone was celebrating the big engagement, Brainy was still perturbed about Lex’s unusual behavior. Something changed the bald villain in the future, and he needed to know more. Looks like Brainy will head back to the future.

With both the hope and the love totems destroyed, it seemed like Nyxly’s plan was dead in the water. However, Lex revealed that the hope totem reincarnated, and so would the love totem. Unbeknownst to them, it already has… in Esme.

Got thoughts on tonight’s Supergirl? Drop ’em in a comment below.