This week on DC’s Stargirl, a series of quieter moments and needed conversations set the table for Season 2’s finale — while also leaving us with a haunting hint of what Eclipso has planned.

As Yvette Monreal recently told TVLine (and as we ourselves predicted a ways back), the JSA is going to need all hands on deck for the finale, and this Tuesday’s episode went about locking down that super-sized team.

For example, Courtney had to convince her mom, and later Yolanda, that they needed to ally with Cindy/Shiv in this final showdown. Pat and Mike, meanwhile, went about bringing Rick and the Thunderbolt into the fight.

Pat paid a visit to Matt, who is still in traction at the hospital after being mistaken for Solomon Grundy a few episodes ago by his nephew, and summarily pummeled. Pat tried to appeal to Matt’s investment in salvaging Rick’s future, but when Matt responded by jotting down on a nearby notepad, “GO TO HELL,” an irked Pat locked the door and closed the blinds to the hospital hall. Pat noted that Matt is a “bad guy,” but added that one thing he has learned over the years is that he has some “bad” in himself, too….

We don’t know what all then transpired, but a few scenes later, Pat was picking Rick up outside the cop shop, the charges having been dropped! 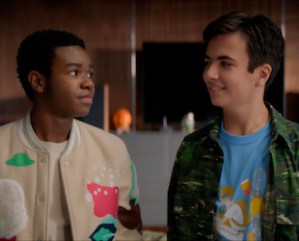 Mike meanwhile followed a trail of supersized junk food, followed by the discovery of a paper boy’s abandoned bag, to determine that his friend Jakeem had “inherited” Thunderbolt. Thing is, the genie is currently on an hours-long Chinese food run — to China — so in the interim, Mike looped Jakeem in on all things JSA, while also helping wash some of the Williams family’s dishes. 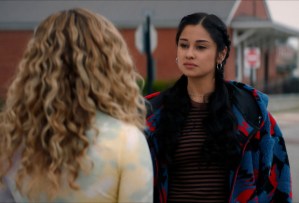 Courtney met up with Yolanda outside of the church to relay the news that the OG JSA once had to kill someone — Eclipso’s onetime host, Bruce Gordon — meaning that Yolanda was not the first hero to take a life. Yolanda, however, did not see this as the good news that Courtney did. Instead, her takeaway was she was the second Wildcat to kill someone, so she swore to never suit up ever again. Ever. But upon finding Cindy in her bedroom and learning that the former ISA apprentice was now working alongside the JSA, Yolanda showed up at Court’s to say that she will rejoin the team for this epic battle, if only to keep Shiv from (literally?) stabbing them in the back.

The episode ended with Beth and the returned Dr. Charles “Call me Chuck” McNider combining their goggles’ powers to locate Eclipso, but ultimately realizing they’d need the ISA’s supercomputer to finish the job. Arriving at the American Dream HQ, they were startled by wee Bruce, who was pleased to hear that Beth had already signaled for her superfriends. After all, Eclipso’s cherubic alter ego gloated, he needs them all to accomplish his goal…. 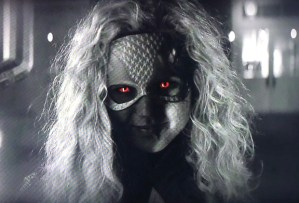 And as Beth inquired as to what exactly the demon’s endgame is, we see Green Lantern Alan Scott’s daughter Jennie continuing to have some very bad dreams (ever since she zapped with her ring some dark energy “afterbirth” in the cafeteria). Jennie appears to be having glimpses of a near-future in which Yolanda, Cindy and Pat, at the very least, appear dead — and in which Stargirl is stepping past their lifeless bodies, now sporting a half-purple, Eclipso-like face.

Eclipso’s plan, Bruce informs Beth and Chuck at the American Dream office, is to exploit the badness in no less than Courtney Whitmore… and in turn become “your new god.”

What did you think of this season’s penultimate hour? And who do you think Cindy reached out to via telephone, saying they needed to get back to Blue Valley?