Monday’s episode of The Voice not only marked the beginning of Season 21’s Knockouts, it slid into the Mega Mentor’s seat Ed Sheeran (pre-positive COVID-19 test, obviously). And he quickly proved himself to be not only a savvy advisor to Blake Shelton, John Legend, Kelly Clarkson and Ariana Grande’s starstruck teams but also a right charming chap, too. One minute, he was playfully praising Blake’s dressing-room rendition of “Sweet Caroline,” the next he was cracking wise about how Yanks think that every Englishman drinks tea and knows the queen. And OK, fine, he has met her, he had to admit.

But enough about Ed’s winning personality. Which of the dozen acts that did battle sounded like they could emerge victorious this season? Read on, and as we do every Monday (and also Tuesday, for good measure!), we’ll discuss… 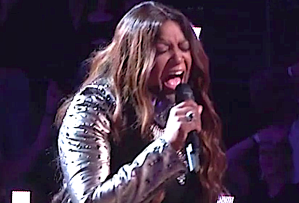 Team Blake: Wendy Moten performing “Ain’t No Way” (Grade: A+) defeated Jonathan Mouton performing “I Can See Clearly Now” (Grade: A) | After sharing what an inspiration Aretha Franklin was to her, Wendy blew away Ed so much with her practice run-through that his only suggestion was that she hold the mic rather than leave it in the stand. She was and is that good. Poor Jonathan gave it his all, but I didn’t figure even reminding Blake of his cancer battle would get him a pass to the Live Playoffs, not against Wendy. On stage, Jonathan delivered a gorgeous, well-modulated cover (even with Kelly yelling, “I love this song!” over him). Now, I’m a Jonathan fan in general, but even I was like, “Well, [bleep]!” If he was going down, he was going down swinging. The guy was as “on” as “on” gets. Up second, Wendy… well, [bleep] all over again! From the jump, she redefined control, building, building, building to a chorus that was so freaking powerful and perfect, it damn near squeezed tears out of my jaded old eyes. Simply staggering!

Team Ariana: Raquel Trinidad performing “Valerie” (Grade: C-) defeated Katie Rae performing “Hold On to Me” (Grade: B) — Katie stolen by Kelly | Once Katie ran through her Lauren Daigle cover for her coach and Ed, he urged her to build to the big capital-M Moment in the chorus rather than belt the whole song. Ariana, meanwhile, dispensed some hard-won advice to keep Katie from tuckering out her voice. Practicing second, Raquel threw me off, mainly just because I wasn’t prepared to hear “Valerie” without that Amy Winehouse tanginess that I’m so used to. Ari and Ed weren’t fussed, though; in fact, they had more praise than advice for Raquel. Performing first, Katie it made it clear that she was trying to take Ed’s suggestion to heart; trouble was, belting is just kinda her go-to. She was pretty good, too; there was just a sameness throughout her performance and a heaviness that didn’t necessarily serve her well. Second at the mic, Raquel sounded as thin of voice as I’ve always wanted to be of waist, so her performance landed with all the force of a limp noodle. The coaches loved her mini-runs, but if her “Valerie” came on the radio, I’d probably check to see what was on other stations. 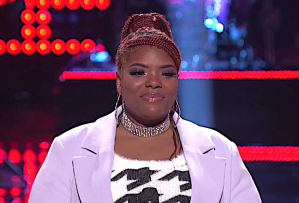 Team Kelly: Gymani performing “PILLOWTALK” (Grade: B-) defeated Kinsey Rose performing “Strawberry Wine” (Grade: D) | In rehearsal, Gymani pretty much exploded Zayn’s hit, taking it from something intimate to something raw and expansive. Ed was particularly taken with the raspiness of Gymani’s voice. Next up, Kinsey explained that she’d chosen a Deana Carter song that had always meant a lot to her late grandpa. Following her run-though, Kelly encouraged her to pull out the yodel in her voice. When the spotlight at last fell on Gymani, she at first treated her voice like an orchestra; herself, its conductor. But something was amiss. She stumbled early on and just didn’t sound confident. Were it not for the fact that she rebounded in time to land her raspy last chorus, I reckon she’d have been toast. Not her finest hour. When it was Kinsey’s turn… eh… she sounded pretty but flat. Till she hit the chorus, there was just no life to her performance. And even then, that life was awfully muted. I know it wasn’t, but this felt like a record that was played at the wrong tempo. Zzz. In the end, Kelly said her decision wasn’t made because Gymani is the better singer but the better competitor. (Not sure if I agree with that, considering how well country acts have done in the past, but OK… )

Team Legend: Joshua Vacanti performing “Falling” (Grade: A-) defeated Sabrina Dias performing “Photograph” (Grade: B) | Once Sabrina had taken a shot at Ed’s hit — while playing guitar and drums (not simultaneously) — he marveled that he’d never heard it sounding so power-ballady. For his part, John wanted to hear his contestant shred her voice a bit more. Joshua, who seemed to be wearing a chartreuse pair of painter’s coveralls, impressed his coach and mentor with the emotion of his performance. Keep it simple, though, Ed advised. In the moment of truth, Joshua reined himself way in, to great effect. The drama that he seems to naturally bring to his performances was still there, but he was controlling it instead of the other way around. Solid and soaring. Following Joshua into the spotlight, Sabrina sounded sturdy but not necessarily memorable. Going from guitar to drums was a fine gimmick, it just didn’t make her vocal any more exciting. Good, not great. 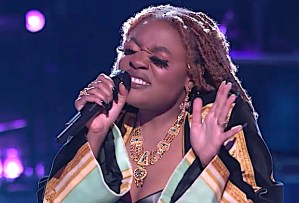 Team Blake: Libianca performing “everything i wanted” (Grade: A-) defeated Hailey Green performing “God’s Country” (Grade: B+) | In rehearsal, Hailey sounded totally badass on Blake’s hit. All he and Ed wanted was for her to reconsider playing guitar throughout; if she needed it as a crutch, fine. But she needed to know that it wasn’t going to be the audience’s focus. When it was Libianca’s turn, she had to stop mid-performance, the urge to cry was so great. Blake wanted her to keep the emotion, just… ya know… not so much that she couldn’t get through her Billie Eilish cover. On stage, Hailey went from a “How low can she go?” lower register to a growly chorus that brought Ari to her feet. And that long note that she hit was a total winner. Was it perfect? No, but these are the Knockouts, and she did pack a punch. Second on stage, Libianca was at a disadvantage, I thought, because her song was so much quieter. On the contrary, though, because her number wasn’t so big and yelly, we could really hear the little bits of spin that she put on notes. Her performance was thoughtful and nuanced; less electric than Hailey’s yet nonetheless superior.

Team Kelly: Girl Named Tom performing “Wichita Lineman” (Grade: A+) defeated Holly Forbes performing “Superstar” (Grade: A) — Holly stolen by Ariana | Hmm. When Holly said that she’d be covering the Carpenters, I worried. She tends to be a go-for-broke singer, right, whereas Karen (the rare good Karen!) was more restrained. Holly sounded like she was making it work, though. When Girl Named Tom ran through their Glenn Campbell cover, it was so freaking pretty, it made me wish they were doing The Carpenters. What were those haunting high notes Bekah was hitting! (Something she’d made up, it turned out. These kids — wow.) Come showtime, Holly turned out a stunning rendition of the golden oldie, less bombastic and more vulnerable than I’d anticipated (even if it was much louder than the original). Hers was a heart that wasn’t just breaking, she was being cut on the pieces of it. Closing out the night, GNT sang with a purity and precision that was nothing short of breathtaking. And perfect as their vocals were, they were nonetheless filled with emotion. Pretty sure I had goosebumps from start to finish.

So, who really knocked you out Monday? Vote in the poll below, then hit the comments with your reviews. Could you believe nobody stole Jonathan Mouton or Kinsey Rose?!?