Despite the dozens of character roles Steve Harris and his equally talented younger brother Wood Harris have brought to life, they had never shared the screen as enemies until Sunday’s installment of Starz’s BMF.

The Chicago natives even appeared on FX’s cult classic Justified during Season 5, both in recurring roles, but never had a scene with just the two of them arguing.

This changed when Steve Harris, who costars as Ecorse Police Det. Vaughn Bryant, verbally sparred with Wood Harris’ character Pat the cocaine dealer in Episode 5 of the crime family drama.

Pat offered to put him on his payroll, and an offended Vaughn (who is actually a dirty cop) menacingly turned him down and called him a dinosaur he’s going to “make extinct.” Executive produced by 50 Cent, BMF follows the kingpin ascension of Detroiters Demetrius “Big Meech” Flenory and his younger brother Terry “Southwest T” Flenory. Pat is their supplier, and they grease Vaughn’s palms for intel and assists.

“It’s a show about brothers starring two famous brothers,” showrunner Randy Huggins tells TVLine. “I promised the Harris brothers a Heat scene, like [Robert] DeNiro and [Al] Pacino, and together this is what we did. They’re OGs, and they’ve been doing this longer than me, and they hassled me, but when it was all cut together, I cried. This is what it’s all about. It’s not about me or my ego and feelings. It’s about the overall story, and that scene is Emmy-worthy.” 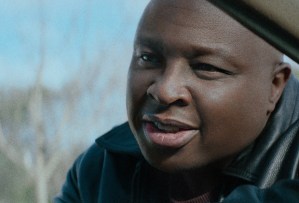 The Practice and Law & Order: Organized Crime vet Steve Harris agrees and says going toe-to-toe with his sibling Wood, who is best known for his role as Avon Barksdale on The Wire, was a dream come true.

“50 has a lot of fondness and respect for both of our careers, as does Randy,” Steve Harris divulges. “They really wanted to put us together and create a scene that would allow us to play with each other, which no one has actually ever seen. We’ve never played opposites in a scene. It gave us a chance to go at it. This truly was a highlight.”

Of course, the Harrises had their notes on how to make the exchange sing. There was jazz playing, as if the two were dueling musicians, and the scene was shot in a barber shop, where Pat sat perched in a barber’s chair like it was a throne. Vaughn, meanwhile, stood the whole time smoking a cigarette and talking trash about Pat’s New York background while exalting Detroiters’ closed fists and distrusting ways. 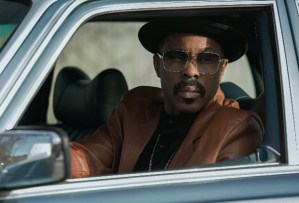 “They wrote it, and my brother and I made it ours,” Steve Harris adds. “Working with Wood is a pleasure. There have been so many years when we didn’t work together. Hell, some people still don’t know we’re brothers, even to this day. Given that the show is about brothers and family, it made sense. Family has always been first for us. So to get the opportunity to play off each other gives me an added layer of appreciation. It was really cool that they gave that to us, and I’m hoping they’ll give us more to do in Season 2.”

What did you think of the Harris brothers’ verbal battle on BMF? Drop your thoughts in the comments.