It’s been a torturous three months for All American fans, who were left to wonder all summer if Coop, Layla and/or Carrie would survive to see Season 4.

Fortunately, during the CW drama’s return on Monday night, the show wasted no time in giving us answers: The headline here is that all three women survived their near-death experiences… but some serious psychological wounds have been created in the meantime. Read on for the details of “Survival of the Fittest,” which picks up a few days after the events of the Season 3 finale.

* WHAT HAPPENED TO COOP? | Despite what the episode’s cryptic dialogue would initially have us believe, Coop is OK, but it’s certainly touch-and-go for a while. After losing plenty of blood in Preach’s arms, Coop is eventually rushed to surgery at the hospital, and she remains in a coma for three days after the surgery is over. Once Coop wakes up, though, Spencer notes that she’s expected to make a full recovery — and the real trouble is now the legal mess that awaits Coop and Preach following the shooting.

As Preach divulges to Patience and Spencer, he shot Mo just as Mo shot Coop the other night… and Mo is now dead. But since Preach is currently a felon on parole, Coop refuses to let him take the fall for Mo’s death. Instead, when a detective arrives in Coop’s hospital room shortly after she wakes up from her coma, Coop lies that she shot Mo out of self-defense after Mo shot her first; she claims not to know what happened to her gun afterward, or how she got to the hospital. The detective, clearly suspicious, eventually leaves Coop’s room, and Preach follows Patience into the hospital hallway when she also abruptly exits the room.

Patience tells Preach that by lying to the cops just now, Coop has once again gotten involved with endless gang drama, and Patience is tired of blaming herself and Preach for what happened to Coop. “The truth is, the person to blame for all the drama that follows Coop around is Coop,” Patience says. “When is it ever gonna stop?”

* WHERE DID CARRIE TAKE LAYLA? | As revealed through flashbacks, Carrie has Layla drive to a Los Angeles overlook before they go to Carrie’s parents’ house, and Layla is terrified when Carrie gets out of the car, approaches the edge of the cliff, then nearly jumps and tries to pull Layla with her. Carrie says she just wants her pain to go away, and she assumes Layla feels the same way, having been betrayed and abandoned by so many people in her life.

“That is not my life. That is not how I feel,” Layla cries to Carrie, who’s still keeping them dangerously close to the edge of the cliff. “Yes, I’ve felt betrayal and abandonment, but you know what else I felt? Forgiveness and love and purpose and hope.” All at once, Carrie finally seems to realize how she’s put Layla’s life in peril, suddenly recognizing that Layla has hope, and they’re not the same. She lets go of Layla’s hand and sobs that she’s sorry, but Carrie still steps closer to the cliff’s edge after Layla runs back to her car. She weeps that she can’t keep starting over, and everything hurts, but Layla finally convinces her to come back to the car, urging Carrie to believe she’s not alone and she will get through this. Eventually, Carrie does step away from the cliff, and she cries in Layla’s arms after admitting she’d like to go back to the Running Springs rehab facility.

After that traumatic incident, which has left Layla with nightmares and hand tremors, she finds herself feeling smothered by her overprotective dad and tries to reassure him (quite unconvincingly) that she’s fine. Later, after a gentle nudge from confidant Jordan, Layla tells her dad that she hasn’t felt safe and secure since her mom died and he left. “You’re part of the home I feel unsafe in,” Layla says to him. “And that feeling is what left me vulnerable to someone like Carrie.” She apologizes, but JP says there’s no need; he just wants to do whatever it takes to get Layla feeling safe again. At the end of the episode, Layla temporarily moves in with the Bakers, and Olivia and Jordan keep her company so she doesn’t have to sleep alone on her first night there. 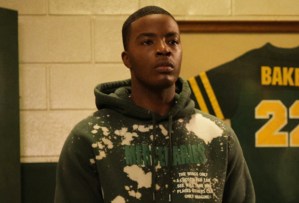 * WHO WON THE STATE CHAMPIONSHIP? | Well, that depends on who you ask. Crenshaw is leading at halftime, but that’s when Spencer gets pulled away from the game after he learns of Coop’s shooting. Later, as the game nears its final seconds, Beverly High is up 38-33, and Crenshaw attempts to score one last touchdown to clinch the big win.

But when Crenshaw’s Chris gets tackled near the end zone, football in hand, the referees and Beverly players frantically assert that Chris came up short of the goal line, and Beverly wins the championship. In Coach Baker’s estimation, though, Chris did get the ball over the line, and he believes Crenshaw to be the state champs, even if that’s not in the official record. And because Billy is still angry with Spencer for training with Jordan before he was medically cleared to play football again, he coldly reminds Spencer that Crenshaw won without him.

Throughout the premiere, Spencer finds himself hesitant to commit to Toledo State University, the only college to offer him a football scholarship thus far. And despite the best efforts of Olivia, Grace and even Spencer’s half-brother, Darnell, to persuade Spencer to accept the offer, it isn’t until Spencer gets brutal honesty from Billy that he seriously considers signing. Billy suggests that Spencer’s reluctance to sign isn’t because he thinks his family and friends will fall apart without him; it’s because he’s worried they won’t. “And who is Spencer James if he ain’t the hero?” Billy asks the teen.

Spencer later visits his father’s grave and admits he doesn’t know how to answer the question that Billy posed — but it might be time to get the answer for himself. So, at long last, Spencer adds his signature to the Toledo State offer letter, and Grace and Dillon pull him into a big hug.

Your turn! What did you think of All American‘s season premiere? Grade the episode in our poll below, then drop a comment to elaborate on your choice!