Warning: The following contains spoilers for Sunday’s Fear the Walking Dead. If you’d rather watch first, read later, off you go.

Over the years, we’ve seen radioactive walkers, waterlogged walkers, moldy old walkers that looked like they were trying to turn into their own fertilizer. But not until Sunday’s Fear the Walking Dead had we ever seen a baby walker. 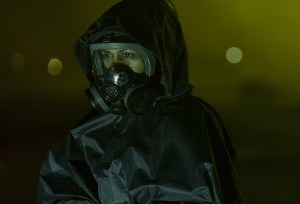 Well, “seen” is probably the wrong word. We didn’t actually get a gander at poor Emma, the infant daughter of doomed Bea and Henry, who’d smothered the child to stop her from crying. But as Morgan and Grace endeavored to get ill-fated Isaac and Rachel’s daughter Morgan — Mo for short — someplace safer than the USS Pennsylvania, our hero overheard zombified gurgling coming from the couple’s luggage.

“What the hell really happened to your baby?” Morgan asked Bea. And just in time for Grace to save Mo from meeting the same fate at Henry’s hand, Emma’s mother sobbed out the whole sad story. Afterward, Morgan put Emma out of her misery by shooting her though the suitcase that would serve as her final resting place.

In other developments, after Morgan and Grace gave up on their great escape, they returned to the sub, only to find Howard cleaning out the cupboards with some of Strand’s henchmen. Grace was welcome to come to the tower, he said; she could even bring Mo. But not Morgan.

Hard pass, replied Grace, who soon discovered a mammoth stash of food right beneath the floor on which Mo had begun to crawl. (How convenient!) And as “Six Hours” drew to a close, we learned that in hot pursuit of Morgan and Grace was Emile’s vengeful brother. (Remember Emile? Virginia’s hitman? From Season 6?) What’s more, the baddie had in his possession not only Emile’s severed head, still in that box marked “Morgan Jones,” but Rufus, who Morgan and Grace hadn’t even seemed to notice had gone missing!

So, what did you think of “Six Hours”? Was it a cheat not to get to see poor Emma? Or were you just as relieved to be told but not shown that there was a walker baby in the suitcase? Hit the comments with your thoughts.