Love took many forms on Sunday’s installment of Call the Midwife. At Nonnatus House, the love of midwifery brought in four new pupils — but none stood out more than Nurse Nancy Corrigan.

When she wasn’t telling the nurses and nuns to call her Nancy instead of Ann, “like Nancy Sinatra,” she was scaring away patients such as Mrs. Greaney, who bristled at Nancy’s aggressive style and decided to go to Cuthbert’s Hospital instead. (More on that later.)

Over at the Leeks’ house, matriarch Rita was over the moon because her son Michael, who worked at the Parthenon Hotel, was coming home to take some time off and relax.

Rita adored her son so much, she dashed off to Fred and Violet’s shop to buy him loads of sweets and candy. Their visit went well until Michael became ill and Dr. Turner had to make a house call. The doctor discovered that Michael had a pilonidal cyst at the bottom of his spine, which he had to have surgically removed. While at the hospital, the staff also diagnosed genital warts, which meant that Dr. Turner and Nurse Phyllis had to send the teen to a venereal disease treatment center.

Michael was ashamed that he had an STD, but he was even more crestfallen about being gay. When Dr. Turner asked Michael about his sexuality, Michael said he wished he wasn’t queer because it was illegal in England until a year later, in 1967. (Over in America, homosexuality was deemed a mental illness until 1973.) But a rather progressive Dr. Turner didn’t care about any of this. He wanted Michael to love himself and his sexuality without moonlighting as a sex worker at a seedy hotel. 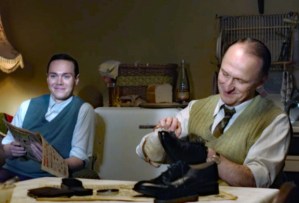 Inspired by Dr. Turner’s words, Michael came out to his parents but they were anything but loving. His screaming and crying mother reacted so aversely that he ran away and checked himself into an abusive and dangerous aversion therapy center that “cured” people of homosexuality.

Nurse Phyllis and Dr. Turner did some digging, and once they figured out where Michael was, they rushed to the center and demanded that Michael, who was still being treated with post-surgery antibiotics, be released immediately.

The orderly on duty eventually acquiesced, and Dr. Turner and Nurse Phyllis found Michael drugged and vomiting while being forced to look at gay pornography. Michael then returned home, where his mother and father apologized profusely and said they would never treat him so horribly again because they loved him no matter what.

The Leeks served as quite the contrast to Dr. Turner and his wife Nurse Shelagh, who excitedly discussed their son Tim’s desire to attend medical school. But in the end, both sets of loving parents wanted the best for their sons. 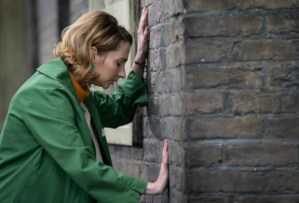 Back at Nonnatus House, Beryl Greaney had to renege on her hospital hopes and walk to find a midwife when her water broke and no taxis would pick her up because England was in the World Cup. Everyone was gone except Nurse Nancy — the last person Mrs. Greaney wanted to see — and Sister Monica Joan.

Nurse Nancy kicked the elder nun out of her bed so Mrs. Greaney could give birth in it, and Sister Monica Joan — who was moping because she had lost her faith in God — sprung to life and coached the green midwife through a successful and faith-affirming delivery. 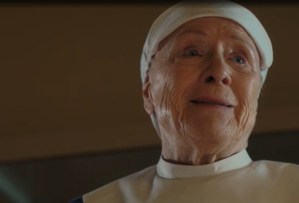 This imperfectly perfect act of God, and a closer examination of the newborn baby’s umbilical cord and placenta, helped to remind Sister Monica Joan of the Lord’s handiwork and her faith was restored. Or, as she so eloquently put it, “And so within his love am I.”

Other acts of love included Cyril romantically proposing to Nurse Lucille, Nurse Trixie attending the christening of her deceased patient’s baby, and Fred shaking off the sadness of his gambling loss and playfully hanging out with Reggie.

What did you think of this week’s Call the Midwife and do you think Nurse Nancy has a bright future ahead of her? Drop your thoughts in the comments.