Warning: This interview spoils the YOU Season 3 finale. Haven’t finished? Get thee to Netflix.

Plenty of blood is shed in the third season of Netflix’s YOU, but not everyone who goes up against the Quinn-Goldbergs meets the same grisly fate as Peach, Candace and so many others before them.

Take the killer couple’s new besties, for example. An ill-conceived foursome in Episode 8 ends with Cary (Travis Van Winkle) and Sherry Conrad (Shalita Grant) being thrown into “The Cage” after overhearing the truth about Natalie’s murder, but did they let that get them down? No, sir. “We not only survived, but we thrived,” actress Grant tells TVLine. 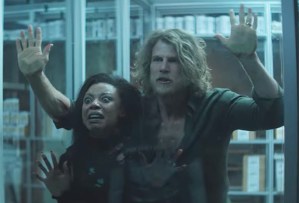 Adds Van Winkle, “All of their layers were peeled back when they got into that cage, and what you realize is that they’re a damn good team. You spend most of the season not liking Sherry and Cary, but then you see them in the cage. They are who they say they are, and there’s something beautiful about that. It was so iconic to be in that damn cage, let me tell you. But it was even more iconic to make it out.”

That said, if you were surprised the couple managed to avoid meeting their maker, you’re not alone. “When I found out we were going to survive, I was like, ‘God damn it!'” Grant admits. “I’ve never died on camera, and I was practicing how I was going to die. But when we got into the thick of it — once we got to Episode 6 or 7 — I was like, ‘Of course these people are going to survive!’ These are two people who know they’re going to succeed in life. I also thought it was very poetic that while they survived this dehumanizing situation, the house of Love had to burn down.”

And we couldn’t let these two go without discussing the foursome that shall live infamy, specifically Cary’s unforgettable moment opposite… himself.

“If you’ve seen Episode 8, you know my most memorable moment,” Van Winkle says. “It was a moment where Cary really got to represent how much he loves himself. Self-love is a very important thing in life, and I don’t want to knock that down. There’s a moment where Cary wants Joe to love himself as much as Cary loves himself. It’s a teaching moment, and it was one of my funnest moments on set.”

Did Season 3 end as you expected? Grade it in our poll below, then drop a comment with your full review.