One of Us Is Lying‘s Murder Club solved one mystery while getting themselves into a heap of new trouble in Thursday’s season finale. (Or is it series ender? The Peacock drama has yet to be renewed.)

The episode begins with Nate returning to school after Bronwyn posted bail for him. After learning from her lawyer how the police know Simon didn’t kill himself — he brought extra EpiPens to the nurse’s office — Bronwyn is convinced Simon had an accomplice. And a text from Addy of Jake’s Xbox chat log leads her to realize that Jake had access to their phones on the day they all got detention. Plus, Jake took the Xbox from Simon’s room at his wake. What if he also knew Addy’s secret long before “Simon” posted it?

Just as Murder Club is discussing how Jake likes to manipulate Addy, he walks into the meeting and claims that Xbox log was just a random guy looking for dirt. He then gives his girlfriend an ultimatum: him or her new friends. Addy chooses Jake, as a flashback reveals that Jake forced Simon into telling him that Addy cheated.

Bronwyn, Nate, Cooper and Janae decide to crash Jake’s Halloween party so they can get the Xbox from his room. Kris helps with costumes (after warning them how crazy their plan is). Cooper worries that no matter how the evening goes, he’s going to lose his friend. “I don’t have that many people,” he says, to which Nate replies, “You have us.”

As an invited guest, Cooper walks into the party with no problem, but then Jake threatens to throw him out when Cooper takes off his mask. So Cooper comes out to him and uses their years of friendship to win back his trust. While Cooper distracts Jake, Bronwyn, Nate and Janae sneak upstairs, only to discover that the Xbox is locked up in a safe. In the midst of all the nail-biting action, Nate gets upset with Bronwyn and wants to know why she’s risking her future for him. She blurts out all her feelings about his good qualities and how she wants to be with him and can’t go more than a couple seconds without wanting to kiss him. So he plants one on her (“You are fresh out of prison,” an annoyed Janae remarks).

Speaking of how awesome Janae is, when Jake finds her and Addy in one of the bedrooms and tries to manipulate Addy into changing her Halloween costume, Janae says to Addy, “How do you like them pancakes?” 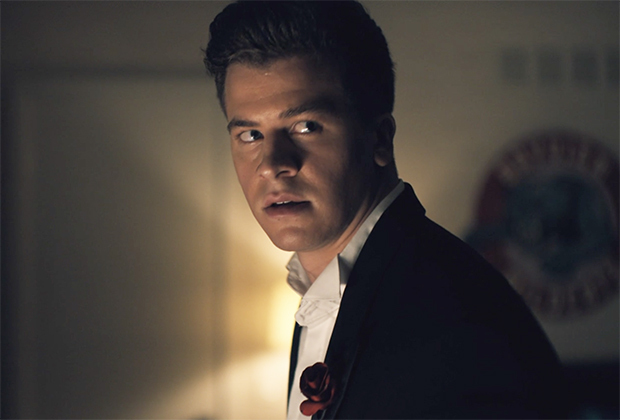 Addy kicks Janae out, but it’s all a front: She actually snags the safe key from Jake and brings it to Bronwyn and Nate. When Jake discovers this, he points a gun at Nate and Cooper in the hallway, while Bronwyn and Addy jump out the bedroom window. Bronwyn hurts her foot, so she hands off the Xbox to Addy and tells her to run. But Addy came to the party on her bike, so Jake easily catches up to her in his car and runs her off the road. She dashes into the woods, but is eventually caught by Jake, who blames her for everything, including Simon’s death.

Here’s where we need to back up and review the episode’s flashbacks of what really went down between Jake and Simon. Jake wanted Simon to write a post about Addy so that she would suffer for cheating (“You cross me, I’ll teach you a lesson”). Then Jake remembered how when he and Simon were younger, he dared Simon to take peanut oil and make it look like a jock poisoned him. They didn’t go through with it back then, but now that they’re smarter (which is debatable), what if they actually did it, Jake wondered? “You’re sick,” Simon replied, and I have to agree. “I dare you,” Jake said challengingly.

As Jake and Simon hatched their plan, Simon asked Jake if he would be waiting outside detention just in case something went wrong. Jake flatly said no and that he couldn’t be tied to Simon. Hence their use of the Xbox to communicate, leaving no trace. Simon responded to “dumbass” Jake that he was recording their chats. Actually, j/k, he wasn’t — or was he? That got Jake nervous, so he promised to be there. “We’ll teach them a lesson they’ll never forget,” Jake said, and yes, the “them” even included his buddy Cooper, whom Jake thought needed to be taken down a peg.

When the first day of school came, Jake went to the nurse’s office and stole the EpiPens, writing Addy’s name on the sign-in sheet. He wanted to kill Simon for thinking he could play him, then frame Addy for cheating on him. However, no one thought she was smart enough to pull it off, so he had to go with Plan B to frame the most obvious suspect, aka Nate.

Back in the woods, Cooper and Janae come to Addy’s rescue, with Janae hitting Jake with a bat. In the middle of scuffle, a shot rings out. By the time Nate and a limping Bronwyn catch up to them, Jake is bleeding profusely from the abdomen and on the verge of death.

Cut to two weeks later, and the police are saying that Jake ran away. Since he conveniently left the Xbox in his room for the police to find, the authorities are considering dropping the charges against Nate. You would think that would be good news for his budding romance with Bronwyn, but he rejects her and says, “We’re not each other’s normal.” In the cafeteria, each member of Murder Club seems to have gone back to their old cliques. Sitting at their separate tables, they all get a mysterious text from Simon Says: “Do as I tell you. Or everyone will know what you did.”

So with some deviations from the book, One of Us Is Lying wraps up Simon’s murder and launches a new mystery, suggesting that the series will continue to diverge from the novels. When asked if a potential Season 2 will be based on the second book, One of Us Is Next, which focuses on Bronwyn’s sister Maeve, executive producer Erica Saleh told TVLine, “That remains to be seen… Season 1 ends partly through their senior year in high school, so still in Season 2, we’ve got to stay with these characters and see what happens to them in the rest of their senior year.”

One of Us Is Lying fans, what did you think of the killer reveal and the book-to-show changes? Grade the episode, then hit the comments!