Maurice and Sabrina’s bank robbery saga on Tyler Perry’s Sistas continued this week, with Q becoming more irritated and forceful at the top of the show. He demanded that Sabrina open the bank vault, and somehow she and Maurice convinced him that they needed to call corporate first.

And Sabrina did call corporate, but the code she gave the woman on the other end let her know that they were being robbed, and the bank employee called the police.

Q figured out that something was amiss, and he escaped out the front door while his bank-robbing cohorts ran out the back when officers arrived. While waiting for the police, an embarrassed Maurice confessed to Sabrina that Q, his lover, had hooked up with him the night before and pulled a gun on him soon after in order to rob the bank. Sabrina told Maurice he needs to be more careful, but she cut her sermon short when she realized Maurice was struggling emotionally and didn’t need her to make him feel worse.

The lead police officer at the bank assured Maurice and Sabrina they would catch Q and his masked friends, and then he asked if either of them knew the robbers. That’s when Sabrina said Maurice did, and he didn’t like her snitching one bit. The cop took the two aside for their statements, and Maurice comically apologized to the officers for the unfashionable outfit Q made him wear at gunpoint. 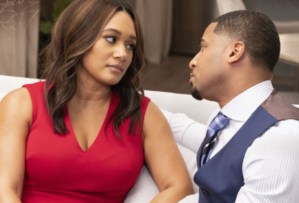 Elsewhere in Atlanta, Zac checked out the investment property he wants to buy. Unsure if he wanted to put in an offer, he called Fatima to see if she could sneak out of work to take a look and give her opinion on the place. After Zac hung up, the real estate agent flirted with Zac and asked him out for drinks, but Zac said he was seeing someone. Yay! Zac is growing up.

Before “Zatima” fans could cheer too loudly, however, Karen called after Pam got her all riled up about the money Zac gave her, and she thanked him for the check. She admitted that her salon was in trouble because one of her stylists left, and the repayment Zac had given her was right on time. Karen asked if he wanted to grab dinner, and an perturbed Zac passed on the offer, which hurt Karen’s feelings a little.

Zac wasn’t annoyed for long, and the minute Fatima showed up at the house, he couldn’t stop smiling. Awww! He asked Fatima to see his vision, and although she couldn’t because the newly built house was a collection of wooden studs, Fatima still encouraged Zac with positive and supportive words, which only made him smile more. Fatima was smiling, too, until she got back to work and learned that Hayden was snooping around her desk, so she cussed him out after Andi told her what happened.

Lastly, El Fuego ran into Danni at the airport and invited her to hang out with her girls at Eden, the strip club where he dances. Danni gave him a hard time, but she’ll probably go, which will also open the door for that Sistas/All the Queen’s Men crossover episode fans have been anticipating.

What did you think of the way Maurice and Sabrina got rescued on this week’s Sistas? And are you bothered by Karen’s renewed interest in Zac? Drop your thoughts in the comments.