Ahead of Chicago P.D. Season 9, executive producer Rick Eid teased that Atwater would form a “fun and really unique” bond with a dynamic woman, and that their relationship would be a “safe space for the pair to be their true selves.”

THE SET-UP | The smooth sounds of N’Qya’s “No Time Like Tonite (Let’s Groove)” filled the air as Atwater flirted with a beautiful woman at a bar. The chemistry was off the charts, and they ended the night in bed together. The next morning, Atwater learned that her name is Celeste (played by Trial & Error‘s Amanda Payton), and she’s a social activist/art teacher. Afraid she wouldn’t take kindly to his profession, Atwater simply told her he works for the city.

THE CASE | A drive-by shooting left four people dead, including a former gang member who had turned his life around. A day prior to the incident, said victim got into an argument with Hubber, a local rapper who uses a program for at-risk teens as a front to recruit them into gangs. In “Why Atwater’s Love Interests Always Gotta Be Linked to a Case” news, Celeste happened to work with the at-risk teens suspected to be involved in the shooting.

Still wanting to be just a guy she met at a bar, Atwater asked his bestie Ruzek to question her in his place, and Celeste agreed to head to the station for more questioning. During her interrogation with Upton and Voight, she remained calm but firm, unwilling to subject her kids to the force’s dehumanizing gang database — especially without any real proof. 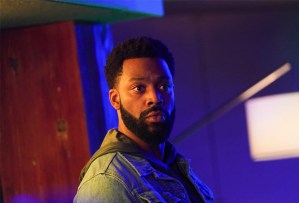 Atwater came clean to Voight about knowing Celeste beforehand and agreed to work her for more information. However, their conversation — which was being recorded — was a moment of mutual understanding. Celeste vented to Atwater about how those young Black kids never get to be kids for long because they’re bombarded with racist messaging from the media calling them dangerous and local gangs teaching them the only way to survive is through violence. The pain of merely existing while Black and automatically being considered a threat, not being seen for who they are, is something Atwater fundamentally understood.

A frantic call from Lewis, one of Celeste’s students, brought them to an abandoned building. Lewis confessed to being the driver during the shooting, and Atwater, who was still wearing a wire, cut off his feed before Intelligence could hear more. As Atwater pressed Lewis for more information, Intelligence swooped in for the arrest.

At the station, Atwater pulled Lewis aside and advised the scared teenager to keep his mouth shut and lawyer up. It seemed like Lewis would escape charges until prosecutors revealed they would charge him as an adult amid evidence confirming he knew where he was driving. Frustrated, Atwater agreed to help transport Lewis to the county jail, and on the way, Lewis revealed he didn’t dump the gun in the river. Before he could say more, though, his friend Eric shot him. A distraught Atwater chased Eric down, begging for answers as to why the teen would murder his friend like that.

The case has clearly gotten to Atwater, and Voight tried to offer some comforting words. The sergeant understood why Atwater tried to help Lewis and also gets that “sometimes this job chews up your soul in a different way than it does mine.” With no proof Hubber forced Lewis and Eric to do his dirty work, it seemed like the gang leader would walk away scot free. However, Atwater pieced together that Lewis hid the gun in Celeste’s classroom, and that was the breakthrough they needed. With Hubber’s fingerprints found on the weapon, there was no getting away. Hubber was done.

THE AFTERMATH | Atwater visited Celeste, who blamed herself for leading the cops to Lewis and then bringing Atwater into all of it. Unbeknownst to her, Atwater was one of the two Black police officers with Lewis when he died, and her impassioned rant only heightened Atwater’s feelings of guilt. Atwater nearly confessed until Celeste cut him off, calling him a good man. He clearly likes her, and she still doesn’t know he’s a cop, but they’re going to be each other’s safe space for now.

What did you think of this week’s episode? How do you feel about Celeste as Atwater’s new love interest? Sound off in the comments below!