Fans of Tyler Perry’s Sistas who are waiting for Maurice and Sabrina’s bank robbery hell to end might consider Jacobi a logical and potential hero.

While Maurice is more than capable of handling himself, Q and his friends are holding him and Sabrina at gunpoint, and tensions are mounting, as viewers will see when the soapy BET drama airs Wednesday at 9/8c.

Jacobi recently attempted to apologize to Sabrina for falsely accusing her of sexual harassment in retaliation for her firing him. And chances are he’s still trying to figure out a way to redeem himself, says Skyh Alvester Black, the actor behind the character.

“You know I can’t tell you if Jacobi is coming to the rescue,” Black coyishly tells TVLine. “What I can say is that you haven’t seen the last of Jacobi. His story isn’t over yet, and he feels bad for yelling at Sabrina. He didn’t think he did anything wrong when he knocked out Calvin. He felt like he was helping Sabrina out. When he yelled ‘sexual harassment,’ he was, in his mind, taking back the power.” 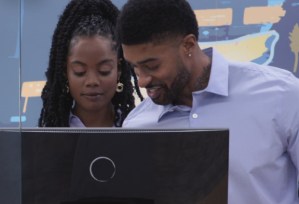 “As a man, especially as a Black man, you mask your hurt with hypermasculinity,” Black reveals. “Society doesn’t allow us to just be vulnerable. At 26 years old, Jacobi is tapping into his ego and his hurt to cope with a situation that bothered him and went beyond his control.”

While Jacobi is all muscles and machismo, Black’s All the Queen’s Men character Amp is wounded and soft-spoken. Fans of the BET+ male stripper drama and Sistas will be delighted to know there will be at least one crossover episode, and that’s why El Fuego (Deon Rome) has been spotted on both series as of late. The fascinating development will be seeing whom Black will portray — Jacobi or Amp — or if he will be in the crossover at all. 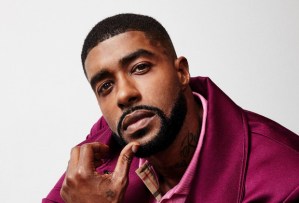 “Amp and Jacobi are totally different guys,” Black surmises. “The challenge was forgetting everything associated with Sistas. I stopped watching once I started All The Queen’s Men. I wanted no thoughts in my head of Jacobi. My voice even changed when I played Amp. On the studio lot, Eden [the strip club] is located right across from Brookhaven Bank, and I didn’t even want to look over there when were shooting.”

Are you hoping Jacobi will save the day on Tyler Perry’s Sistas? Drop your thoughts in the comments.